Bike parts litter the ground at “the boneyard” under I-5 along the Eastbank Esplanade.
(Photo: Portland Police Bureau)

Portland police officers call it “the boneyard” and frustration is growing about how to clean it up once and for all. Location of the boneyard.

The location — underneath the I-5 freeway between the Steel and Burnside bridges — is a well-hidden haven for bike thieves. Out of sight and with the roar of freeway traffic to drown out the clanking and buzzing of power tools, it’s relatively easy to disassemble bikes here, then repaint and rebuild them into untraceable products ready for illicit sales.

When I got my bike stolen last year, I found it in the boneyard. But luckily, mine was just a near-death experience.

Since my experience last year I had no idea the conditions at the boneyard had gotten so much worse. That was until our friends at the Portland Police Bureau shared a tweet about it earlier this month.

I followed up with Central Precinct Ofcr. David Sanders. He’s one of two officers the PPB has on a special Bike Theft patrol unit we helped create earlier this year. Sanders said the area is “essentially a bicycle graveyard.”

In the past year or so Sanders says, he and his team have recovered “scores of stolen bikes” in this area and have arrested and/or excluded (the term for prohibiting someone from a specific area) many suspects.

“It’s really a ‘go-to’ place for criminals who want to hide and do their dirty work largely out of sight by much of the public eye,” Sanders added, “so it also seems ‘safe’ for them to be there and not generate police calls.” 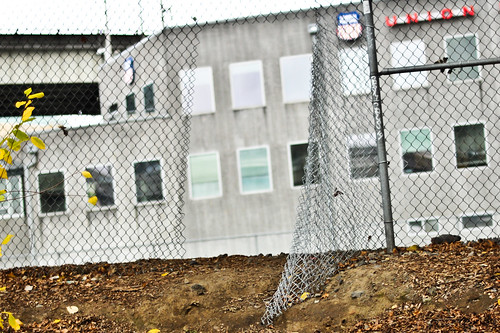 A hole cut in the chain-link fence that leads to the boneyard. That’s the Union Pacific headquarters building in the background.
(Photo © J. Maus/BikePortland) 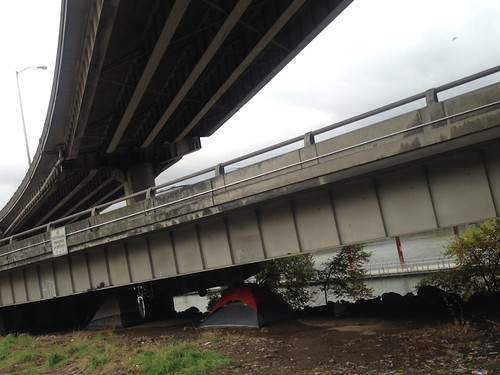 This view shows I-5 and the I-84 flyover with the Willamette River in the background.
(Photo © J. Maus/BikePortland)
– Advertisement – 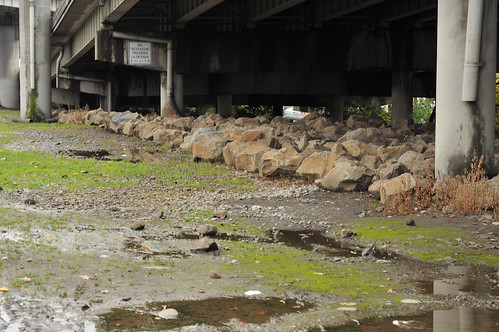 ODOT placed these rocks in the area to prevent camping.
(Photo © J. Maus/BikePortland)

The boneyard is an active place for another frustrating reason: It’s very easy to get to. When I retrieved my own stolen bike I was led to the area by a rather obvious and easily accessible hole that had been cut in a chain-link fence. That hole was there for many months after (it might still be open but I haven’t checked for a while). I could have also walked a few tenths of a mile to another large gate to the area that’s often left wide open.

Whose responsibility is it to manage these spaces? The land itself is owned and managed by Union Pacific and the Oregon Department of Transportation. UP is in charge of a certain distance around the rail lines and ODOT is responsible for the land underneath freeways.

“It’s off the hook right now. …unfortunately there are so many other fires we are trying to put out, it often falls lower on the priority list.”
— Ofcr. David Sanders

We’ve learned from ODOT that they are aware of illegal camping at 200 of their Portland-area parcels. At the boneyard in particular they go in and clean up the site every few months (according to Sanders), but nothing seems to change. Their spokesman Don Hamilton has told us it’s a “complicated issue.”

“We are merely the property owners,” ODOT’s Hamilton said. “When we see illegal activity, we can’t address it ourselves, we have to call in law enforcement. Our maintenance workers have been attacked before.” Hamilton said since the issues themselves (homelessness and criminal activity) go beyond ODOT’s responsibility, so too must the solutions.

Sanders said an ODOT effort to place large rocks in the area in order to make it uninhabitable was “very effective” but it was never completed.

It’s likely that as Portland does more to address its housing and homelessness crisis, fewer people will find themselves living on the streets and under freeways. But given the epidemic of bike theft and this convenient location to participate in it, the boneyard isn’t likely to go out of business any time soon.

If the status quo continues, the future does not look good. Police have a serious staffing shortage and there are not enough officers to address sites like this. “It’s not uncommon for this are a to fester for periods of time without any police presence,” Sanders said. By his estimation, it would take a team of officers spending a full-time effort to deal with the criminal activity he’s seeing under the bridges and overpasses along the Willamette River. “It’s off the hook right now,” he said, “[Officer] Dave [Bryant] and I get over there every now and then, but unfortunately there are so many other fires we are trying to put out, it often falls lower on the priority list.”

The post Bicycle ‘boneyard’ under I-5 freeway is a haven for thieves appeared first on BikePortland.org.