Open bike-share data and integrated payment systems can add up to something very big.
(Photo: M.Andersen)

The “single, supple mesh of mobility” that the government of Helsinki is hoping to use to “make car ownership pointless” by 2025 may be arising spontaneously and gradually in Portland.

For people reading between the lines, an announcement Tuesday from the North American Bike Share Association could lead to Portland becoming the first U.S. city where a single mobile app will be able to let you plan a trip and buy a ride from a bike share service, transit agency, carsharing company or ride-hailing service.

Even that would still be a far cry from the unified payment and fare system envisioned by Helsinki and by transportation dreamers around the world. That’s the digital key to the city that would be convenient enough to replace car ownership for a large share of the population.

But it’s a significant step in that direction — and Portlanders are playing an outsize role in making it happen.

If it works, it’ll be part of a total rethink of urban mobility that’s been happening little by little for years. Instead of assuming that people choose a single mode (car, bike, transit) and use it exlusively, the public and private sectors would both be focusing on helping people choose the best mode for each individual trip they make.

In an interview earlier this month, Portland bike share project manager and NABSA board member Steve Hoyt-McBeth described “interoperability” between bike share and other modes as a “holy grail” that was being discussed by former transportation director Tom Miller back in 2011. It remains “part of the vision of things” as the local bike-sharing system prepares to hire its first general manager, Hoyt-McBeth said.

“In the short term I think we’re just trying to get a system on the ground,” he added. 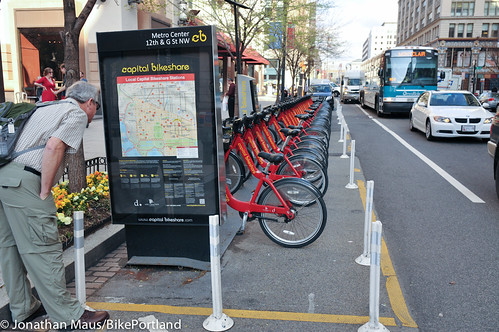 There should be easier ways to do this.

Tuesday’s announcement from NABSA was so dry that it was easy to miss its importance.

But it’s a very important step for North American bike sharing — as important as the open data standard co-created by TriMet and Google in 2005 has been to public transportation.

There’s currently no way for Google Maps to figure out that a five-minute bike-share ride could shave half an hour from a transit trip.

That’s because the transit data standard, called the General Transit Feed Specification, is what makes it possible to get transit arrival information in third-party apps like Google Maps, PDX Bus, Transit App or RideScout.

As for actual point-to-point trip planning, good luck. There’s currently no way for Google Maps to figure out that a five-minute bike-share ride could shave half an hour from a transit trip.

Tuesday’s announcement of the new “General Bikeshare Feed Specification” promises to wipe that problem away over the next few years.

“Social Bicycles is excited to be an early adopter of the new specification,” SoBi CEO Ryan Rzepecki said in a written statement. The other reason Tuesday’s announcement is exciting has to do with a seemingly unrelated announcement last month by GlobeSherpa, the five-year-old Portland-based company that created TriMet’s mobile tickets app.

GlobeSherpa (which also operates transit ticketing apps in Los Angeles and Phoenix and began service last week on San Francisco’s Muni) announced that the TriMet app would be the nation’s first to partner with a ride-hailing company: TriMet app users will get a button that lets them look up and (eventually) book a Lyft ride.

Here’s why that matters: GlobeSherpa was bought in June by a trip-planning app called RideScout, which was bought last September by Car2go North America. (Car2go, in turn, is owned by Stuttgart-based auto company Daimler.)

“I live out in Hillsboro, I’m not near the bus stop, I can use the TriMet app to get a carshare, get to the bus station and use that same payment credential, that same application, to then ride the bus.”
— Mac Brown, GlobeSherpa spokesman

In an interview Wednesday, GlobeSherpa spokesman Mac Brown said all of this means that it’s a matter of “resources and time” before a GlobeSherpa app like TriMet’s will be able to let people book car2go, Lyft, and bike share rides using the TriMet app.

“I live out in Hillsboro, I’m not near the bus stop, I can use the TriMet app to get a carshare, get to the bus station and use that same payment credential, that same application, to then ride the bus,” Brown said. “Same with bikeshare, same with rideshare taxi.”

Initially, Brown said, this will happen by “deep linking” to another app. But the companies have the technical capacity and the management buy-in to eventually allow purchases without leaving the TriMet app.

“It gives each entity the ability to acquire new users,” Brown said.

And that’s the key to the whole picture: because GlobeSherpa has (so far) secured exclusive relationships with transit agencies to operate branded mobile apps, it can offer transportation companies like Lyft and SoBi access to the huge user base of public transit riders if they sign on to the integrated platform.

“Transit is the backbone of the city when it comes to transportation,” Brown said.

Correction 2:50 pm: An earlier version of this post included the wrong word in Brown’s final quote.

The post Bikesharing deal could be high-tech key to a low-car city appeared first on BikePortland.org.