Slide from a recent PSU grad’s study of people’s comfort preferences. An “A” score represents the most comfortable biking.
(Image: TREC at PSU)

What’s the best way to separate bike and auto traffic?

Portland hasn’t built many protected bike lanes yet, but the ones it has include dabbles in every major separation method, from the mountable curbs on Northeast Cully to the plastic posts on the Hawthorne Bridge viaduct to the thick fence on the Morrison Bridge to the big round planters on Northeast Multnomah to the parked cars on Southwest Broadway.

As it aspires to make protected bike lanes its default bike lane design and prepares for a high-profile downtown project, here’s a recent bit of data that might inform the city’s choices: people seem to love planters.

A study presented at Portland State University last month by a recent grad is the latest to show that, for whatever reason, a giant flowerpot in the street seems to be pretty much the most popular way to protect a bike lane. 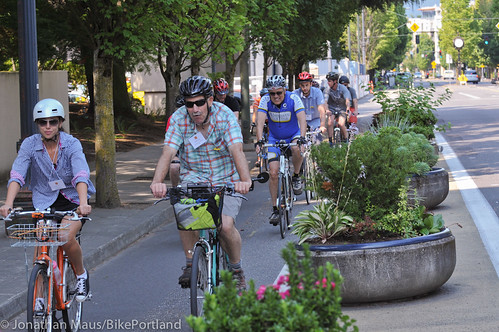 Here’s a clip of Northeast Multnomah Street that PSU grad Nick Foster, now working as a senior planner for the Boise office of Kittelson and Associates, filmed and shared with hundreds of people to ask how comfortable they’d feel biking in it. It was one of 23 clips from bike lanes in San Francisco, Chicago and Portland that Foster drew on to create the data in the chart above.

“They look nice; you can see over them,” Foster said in his Nov. 21 presentation at PSU, summarizing the two biggest advantages of planters.

A 2014 study of bike users in Hangzhou, which is arguably the bike capital of China and has an extensive network of bike lanes protected by greenery, found that “beautiful surrounding environments” was a meaningful reason people enjoyed biking for transportation.

Planters come in lots of shapes and sizes. In terms of appearance, the planters in downtown Vancouver BC make some of the nicest-looking bike lanes I’ve seen: …but they lack one of the big advantages of Portland’s planters, which is that it’s easy for a person on bike or foot to move between them, either to cross the street, to get ready for a left turn, or to get around an illegally parked car or other obstacle.

One big downside of Multnomah’s planters is that they take up so much of the road’s width. They probably wouldn’t be possible, for example, if the general travel lanes on the downtown transit mall were closed to cars in order to create north-south bike lanes. There’s not much room.

Foster’s finding about planters echoes an earlier one from his professor and co-author Chris Monsere, which used still images to ask people how comfortable they’d feel in various contexts: One notable difference is that plastic posts fared much more poorly as a separation method in the video than they did in the still image, which may not have conveyed how flimsy most bikeway posts are.

“Posts are a nice reminder,” Foster said in his presentation last month. “But everyone knows that a post goes down very easy.”