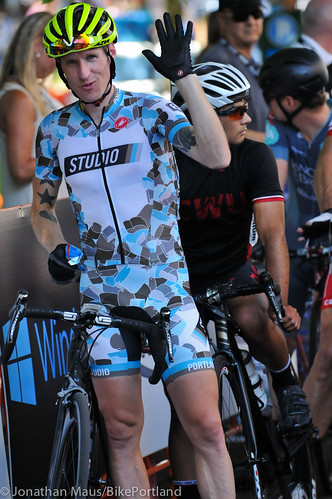 Cameron at the Stumptown Criterium in 2014.
(Photos © J. Maus/BikePortland)

Molly Cameron, a 39-year old local professional cyclocross racer and owner of Portland Bicycle Studio, has just gotten some bad news. Despite a stellar racing season where she amassed 14 top five finishes in the highly competitive men’s “A” category, she has been told by USA Cycling (USAC, the governing body of racing in America) that she cannot race in the men’s event at the Cycloross National Championships next month in Asheville, North Carolina.

The reason? Cameron is transgender. She was assigned male at birth but identifies as a woman. She races with the men, but both her driver’s license and her USAC license both list her as a female (at her request). According to Cameron, USA Cycling is citing rule 7B.1(c) which states, “In National Championships, women may not enter men’s events.”

Cameron has lived in Portland since 2002. She opened the Veloshop bike shop in northeast Portland in 2008, moved it downtown a few years later, and now has moved it to the Pearl District. Now called Portland Bicycle Studio, Cameron and her shop are huge supporters of the local race scene. She sponsors races and this year upped the ante by investing in a women’s racing team that competed all over the state. 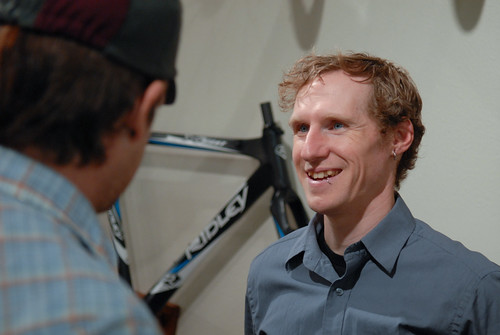 Cameron at an open house for her Portland Bicycle Studio.

According to a 2008 profile of Cameron in the Portland Mercury, Molly started racing with women when she first moved to town. After getting harrassed by female competitors, she was ultimately forced to race with men. (The Oregon Bicycle Racing Association said despite the fact that Cameron had taken estrogen hormones, she could only race with women if she had gender-reassignment surgery.) Cameron raced with the men begrudgingly. As she progressed in the sport she became one of the top racers in the country.

This year she was making plans to race at nationals but got concerned when she wasn’t able to register. The irony for Cameron is that when she first started racing in the 1990s, her USAC license listed her as a woman. “Then at some point they changed it without telling me,” Cameron said via a phone interview today. “I was like, what the fuck?” At Cameron’s request they changed her racing license back to woman, which is what it has been ever since.

Now that change has come back to haunt her.

Cameron says she’s exasperated by the situation but she’s not anti-USAC. On Facebook this evening she wrote, “Put away the pitchforks and torches, USA Cycling is not always right but they are trying. They are not the enemy.”

USAC hasn’t responded to our requests for comment. Cameron says they’ve offered her the ability to file a petition. But that process wouldn’t be completed in time for nationals which are just a month away.

Cameron is keeping a positive attitude about the situation. “I’m of two minds about this. Part of me is like, I’ll go race the woman’s category. Win or lose I’m sure it will piss a lot of people off.”

“Our national championships rules — unlike regional or non-championships events — state that competitors must race in the gender category stated on his or her license. However, we understand that this is a complicated issue and the application of our existing gender rules in this case may not be what was intended. We seek to be fair to all transgender athletes, including Molly, and will immediately look into this case to see if we can find a just solution.”