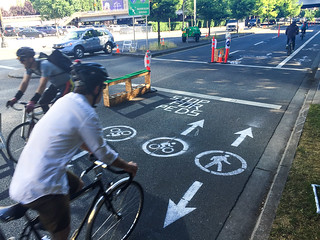 The volunteer organizers of Portland’s three-year-old team of street rethinkers say they’re in the “off season” but getting ready to scale up.

Better Block PDX is the group behind a much-praised temporary redesign of NW/SW 3rd Avenue that led to rapid installation of crosswalks and a buffered bike lane and (more recently) a two-week test of walking and biking lanes on SW Naito Parkway that has some in the city talking about permanent changes.

They’re about to begin considering temporary street demos for 2016, and plan to hold a public meeting this February to start the selection process.

“The ideas of tactical urbanism are meant to be shared, and imitation is the highest compliment.”
— Ryan Hashagen, Better Block

“Let us know your dream projects,” said Ryan Hashagen, who said he’s been chairing Better Block’s volunteer meetings. “We’re always looking for good ideas, and we’d love to hear BikePortlander or community-inspired projects. … We are inviting everyone to join us at our February meeting.”

The date for that meeting isn’t set yet, but if you’re interested you can stay up to date by joining Better Block’s Google Group to get emails about its news.

Hashagen said Better Block hopes to move beyond the central city this year. So far, it hasn’t worked on any street farther-flung than the corner of SE 26th and Clinton.

“The ideas of tactical urbanism are meant to be shared, and imitation is the highest compliment,” Hashagen said. “We’d love to see this style of public engagement — of cheap, quick and easy — tested out for projects throughout the region and beyond.” He said Better Block will be “reaching out to community groups to let them know about the possibilities of better-block style events in their neighborhood.”

He said the group has already been offering advice to the Pacific Northwest College of Art and with neighborhood groups in Goose Hollow and Cully.

In the short term, Better Block PDX is preparing to file paperwork to become an independent 501(c)3 nonprofit. Until now, it’s operated with the local group Umbrella as its fiscal agent.

“It’s just time for us to spread our wings and learn to fly,” Hashagen said. “That will allow us to take on tax-deductible donations and will allow better block to take on larger projects and expand our capacity.”

As for the longer-run goals of Better Block, Hashagen cited a speech by Kaganovich at an Oregon Walks fundraiser in 2014, in which he said that Better Block’s projects show “how to reinvigorate our historic commercial districts” and that it should be possible to “fix our city in three to four years.”

“I want to take it back to what Boris said at the Weston Awards last year: transforming the city block by block,” Hashagen said.