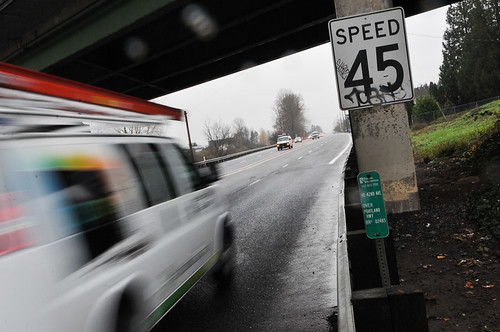 Where the bike lane ends on Lombard under 42nd Avenue.
(Photos © J. Maus/BikePortland)

For years now, whenever I drive on Lombard where it goes under 42nd Avenue, I’ll shake my head and mumble angrily to myself. “So disrespectful… Makes me sick they can just drop a bike lane like that… Look how dangerous that is!… Grrrr…” My poor family just rolls their eyes in a “There goes dad again” type of a way.

When Martin Greenough died after being hit from behind while biking in this exact location, I felt a strange combination of sadness, anger, frustration and validation. We’ve reported on this location twice in the past. Once in 2013 and again — amazingly — just one day before his death.

I had never ridden this particular stretch of Lombard, so I felt a need to get out there myself to take a closer look. Here’s what I saw…

I rolled onto Lombard around NE 29th and hung a right (east) toward 42nd. Lombard has a curbside bike lane in this section. Unfortunately a car was parked in it and I was forced into the adjacent lanes where people in cars and large trucks flew by at five times my speed: 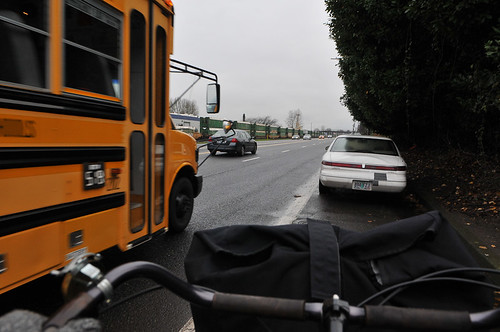 Approaching the 33rd Avenue overpass there’s a curbside parking lane in addition to the bike lane. As you can see from the faded paint and gravel, this isn’t a bikeway that the Oregon Department of Transportation takes very seriously: 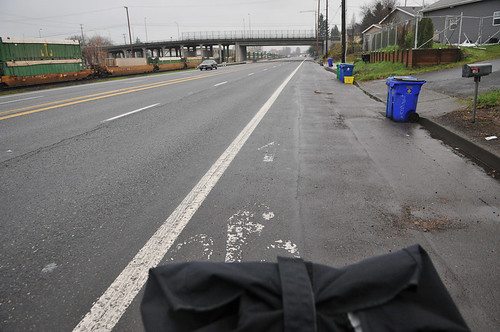 It’s too bad, because Lombard is wide enough to make a protected bike lane that could connect thousands of people and several neighborhoods and destinations: 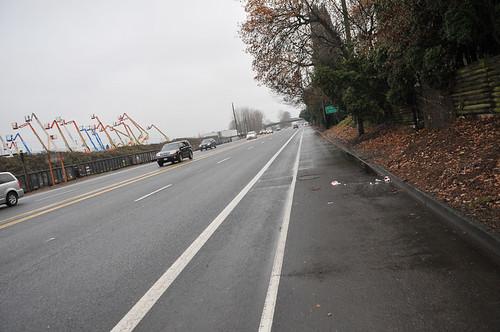 Plenty of room to create a protected bike lane.

As I got closer to 42nd, there was yet another dangerous spot. The exit to 42nd is a very lax angle which allows people to carry a lot of speed into it. And there’s little to no warning about the possible presence of a bike lane user: 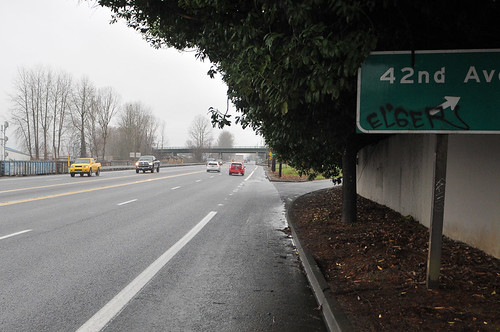 Then I arrived at the place where Martin took his last few pedal strokes. The only indication to road users that anything might merit caution was this sign: 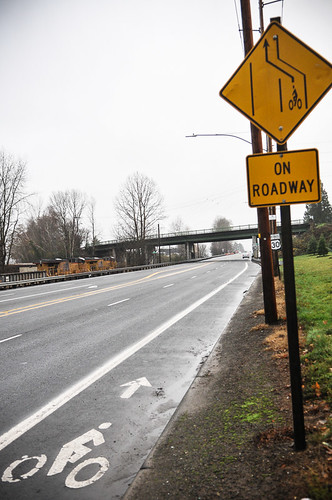 That sign does nothing to build confidence for people on bikes and it does nothing to alter the behavior of people in cars. I have raced bikes (off and on) for over 20 years and I’m an extremely confident urban rider; but even I felt it would be irresponsible to my family if I rode in that gap. So I parked my bike and walked.

I noticed that not only do the bike lanes go away, the road itself shifts north a bit. It’s a very dangerous combination: 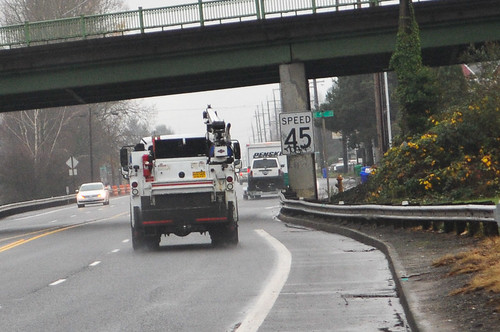 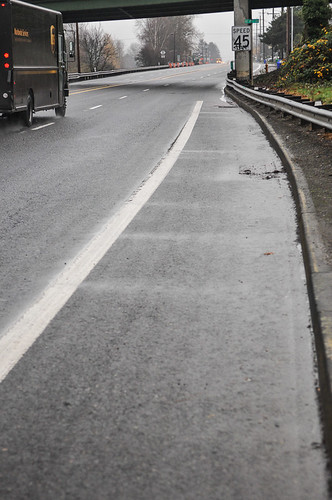 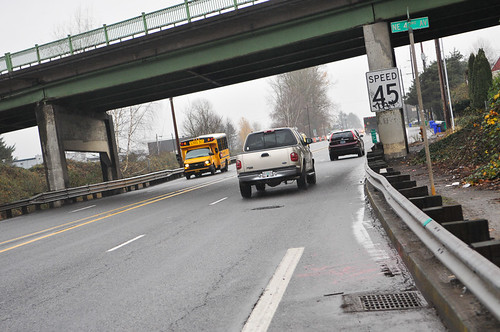 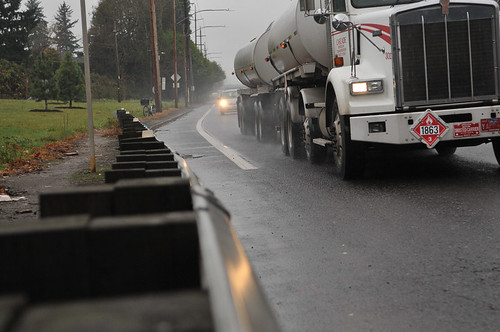 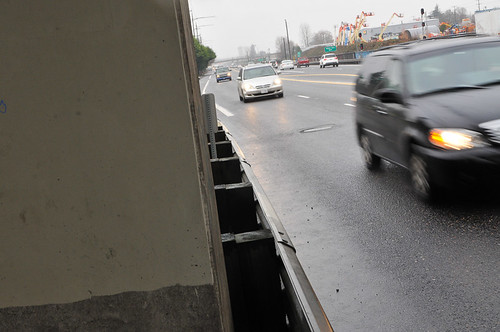 I noticed that many other people avoid the gap by hopping up the curb and walking or riding behind the guardrail, under the overpass, and then re-join the bike lane on the other side. I could see tire tracks in the dirt and there’s plenty of room to make that maneuver (and plenty of room for ODOT to formalize this path): 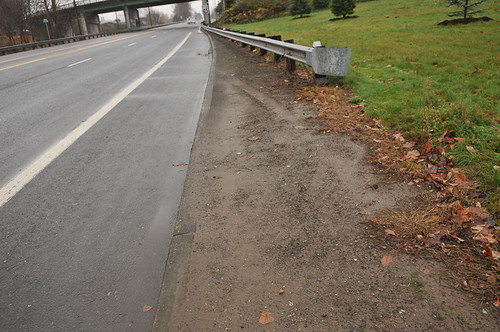 Here’s a look at the eastbound lane and the dirt path next to it from above: 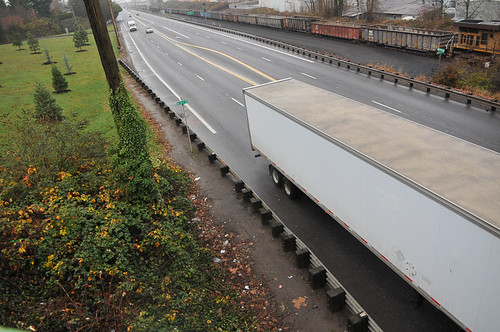 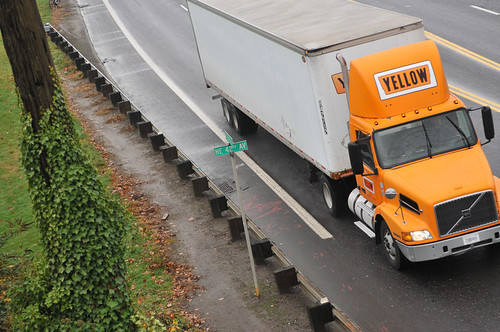 As I stood under the bridge my blood really started to boil. How could they?! How could ODOT think it’s OK to throw bicycle riders to the wolves like this?

After taking some measurements of the lanes (for reference and for future stories), I crossed Lombard to check out the westbound direction. It’s pretty much the exact same situation. The bike lane ends and there’s nowhere to ride.

A few things become clear after you spend time at this location. First you realize how deadly this road is: Not just for people on bikes and foot, but for everyone who uses it. Second, it becomes very apparent that ODOT does not respect bicycle users at all on this section of Lombard and/or they simply assume no one on a bike uses it.

Speaking of which, when I left the area and rode up the 42nd Avenue ramp from Lombard (which is the way you’d go to avoid the gap if you were heading east), I suddenly faced this huge clump of blackberry bushes, vines and leaves in my lane. The only way around was to — once again — merge into the adjacent lane where people were traveling in cars at much higher speeds and were given no warning that I might be there. ODOT needs to fix this gap and clean up their act on Lombard near 42nd. Something needs to happen immediately. This is an open wound for our community and it’s a public safety hazard. I hope ODOT and its Region 1 Director Rian Windsheimer take this seriously. We plan to keep reporting about it until they do.

Next up, we’ll take a look at some of the ways ODOT could make this section of Lombard safer.

The post The trouble with Lombard: Why ODOT’s road is dangerous by design appeared first on BikePortland.org.