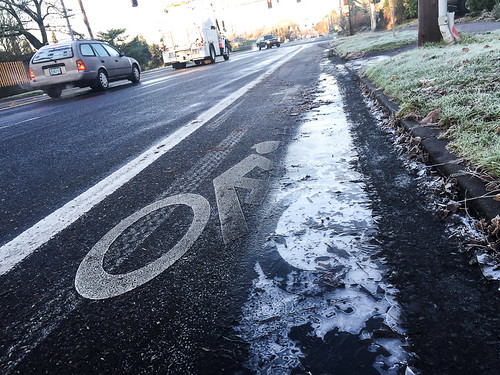 If you rode into work this morning and are reading this, congratulations: You survived one of the most harrowing commutes of 2015. And I’m only slightly joking.

When I left my house in north Portland for downtown this morning I knew the roads were slick and icy. I took my time, tried to stay upright and as balanced as possible, and put my foot down and/or walked whenever I sensed a fall was imminent. I had a few slip-slideys on my way toward the Mississippi area and then headed down the steep Albina hill en route to Interstate.

The Albina hill is both steep and curvy, so I was going very slow. About a third of the way down I looked up and saw a woman standing beside her bike. I could tell something wasn’t right. Sure enough she had just fallen and was about to walk the rest of the way down. After talking with her on the sidewalk, I re-entered the roadway and very slowly continued down while riding in the shoulder with my leg as an outrigger.

A few seconds later, I looked to my left and saw a green blur. A man in a Honda Civic flew by and — just as he passed me — hit his brakes and began to slide straight into the curb. He completely missed the turn and he very narrowly missed me. Had I been about 20 feet further up the road he would have slammed right into me.

I walked the rest of the way down the hill. 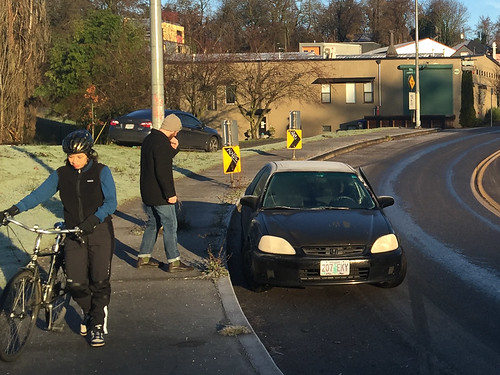 Notice the damage to the right front wheel and fender. The driver (in black jacket) was pretty shocked and fortunately not injured. 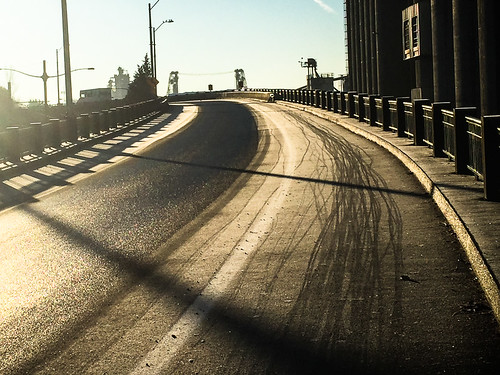 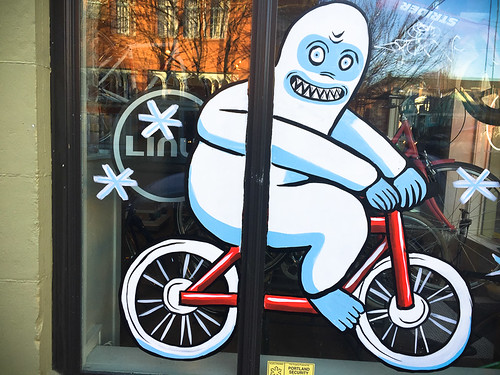 This is only guy I talked to this morning who actually loved the commute. (Window of North Portland Bikeworks on N Mississippi).

We’ve heard from a few readers who crashed along with several other people at specific locations. Here’s what a reader named Emily saw at SE 7th and Stark (near the Paddle Sports Center):

We noticed a couple of riders who may have fallen (bottom of a hill, slight turn) across the street. I saw another fall before I left. I guess there have been 8 riders fall so far, so the guys at the Paddle Sports Center set up a table with coffee for folks.

I thought it was a sweet gesture and wanted someone to know.

And Dan K. is licking his wounds after falling on invisible black ice at SE 7th and Tayor:

I was the third bike commuter that I know of to crash (then slide spectacularly on the slick pavement) at the intersection of Sandy, SE 7th and Taylor — where Sandy goes down a small hill and merges into 7th.

There was black ice in the bike lane that was not apparent at all – even looking at it after I crashed, it appeared to dry pavement. I’m sore with minor cuts but am okay. It appears my bike suffered only a broken rear-view mirror.

I got up to speak with 2 other commuters who were checking themselves and their bikes after crashing at the same spot minutes earlier. One of the bent her front fork. I immediately called PBOT and the dispatcher said they would get a crew there to de-ice that spot.

Please share your experiences from this morning’s ride and any tips you have for biking safely when roads are slick.

The post A harrowing, icy commute appeared first on BikePortland.org.