Two of southeast Portland’s most-ridden bike lanes are slated to be removed at the insistence of the state of Oregon.

The bike lanes on each side of Southeast 26th Avenue near Powell draw something like 600 to 800 people per day (even in winter) and run in front of Cleveland High School. They will be paved over sometime in the coming months and not replaced, the Oregon Department of Transportation said last week.

The decision comes five months after the city’s top biking expert said he thought it would reduce safety on the street.

The City of Portland’s decision to accept the change comes five months after its top biking expert publicly cited four studies showing, he said, that even a narrow bike lane like the one on 26th improves road safety compared to no bike lane.

ODOT spokeswoman Kimberly Dinwiddie said Tuesday that removing the bike lane would improve safety by reducing the number of people biking through that intersection. Many, she predicted, will switch to using 28th Avenue when a new traffic signal and neighborhood greenway are installed there in the coming months. (28th avenue runs along the back of Cleveland High School, which is home to its largest bike parking area.)

Dinwiddie could not identify any evidence, beyond the state’s judgment, that this combination of changes would improve overall safety. She said she was trying to find the information but wasn’t sure when she might.

The change is necessary, Dinwiddie said, because “the intersection of SE Powell at SE 26th is already over capacity for the sheer number of users across all modes: bicyclists, pedestrians, vehicles and buses.”

Dinwiddie said Tuesday that she was unable to say what the “capacity” of the intersection is.

She said the state will “revisit” its decision if large numbers of people keep biking on 26th after the lane is removed and the nearby signal added.

26th Avenue has bike lanes, and is marked for having them in the city’s 2030 bike plan, because it is the flattest and most direct connection between several Southeast Portland commercial nodes. TriMet’s No. 10 bus also runs on 26th once every 30 minutes or so. 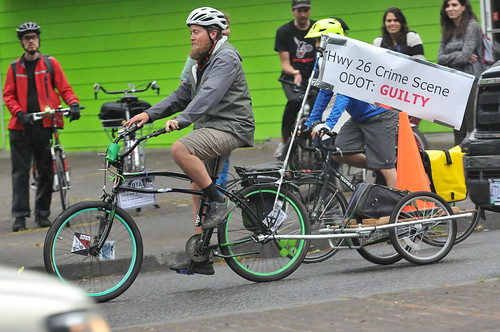 A May 11 protest of Powell Boulevard. The street is also U.S. 26, a state-run highway.
(Photo: J.Maus/BikePortland)

The state seems to be reacting in part to two high-profile collisions last year at SE 26th and Powell.

In one, a man in a truck turned left from 26th to Powell on a yellow light just as a man biked south through the intersection, also on a yellow light. The left-cross collision severed Alistair Corkett’s leg.

In the second incident, three weeks later, a man driving a Jeep ran a red light on Powell just as a man biked north across it. The collision broke Peter Anderson’s leg.

The incidents became a focus for continuing anger about Powell Boulevard from people who live nearby, who say that typical speeds on Powell exceed the 35 mph limit and that the state has refused measures, like narrower lanes, that would reduce those speeds. During the 10 years to 2013, the state-run road saw 381 traffic injuries and three fatalities on the 12 blocks of Powell surrounding Cleveland High School.

Aside from the point where they cross Powell, the 26th Avenue bike lanes don’t seem to show a particular bike safety problem.

Aside from the point where they cross Powell, the 26th Avenue bike lanes don’t seem to show a particular bike safety problem, though they are uncomfortably narrow and run in the door zone at some points. Out of 17 bike-related injuries between Holgate and Division in that period, eight were at the Powell intersection.

About 100 people joined a May 11 protest by legally walking and biking back and forth across Powell in a crosswalk near 26th Avenue during the evening rush hour. Two days later, two dozen people joined a die-in outside ODOT headquarters.

Hours after the second collision, on May 29, ODOT said it would add a new left-turn arrow phase to the signal at 26th Avenue, a change that lengthened the traffic signal cycle. This also lengthened the red light facing Powell.

Meanwhile, the state was reviewing an unrelated request from the Portland Bureau of Transportation. The city had asked for permission to add a new signal at 28th Avenue for the new neighborhood greenway that had been planned as part of the 20s Bikeway — designed to be a less direct but lower-stress alternative to 26th Avenue’s bike lanes.

The state agreed to allow a new biking/walking traffic signal, but on one unusual condition: that the city remove the bike lanes from 26th. Some people who bike on 26th already don’t bother with the bike lanes.

That memo apparently inspired the state’s proposal to remove bike lanes from 26th Avenue completely. BikePortland received it in August after a public record request.

In an email last week, ODOT spokeswoman Dinwiddie wrote that if the bike lanes are removed from 26th Avenue but bike traffic falls less dramatically than the city expects, then ODOT “would be willing to revisit the agreement to remove bike lanes from SE 26th Avenue.”

“Encouraging bicyclists to use the new crossing at SE 28th Avenue or opt to use the travel lane on SE 26th Avenue will raise the visibility of the cyclist in the roadway as well as increase the likelihood they will be seen.”
— ODOT Spokeswoman Kimberly Dinwiddie

“We recognize some cyclists will continue to use the intersection, which is perfectly legal,” Dinwiddie wrote. “Removing the bike lanes on SE 26th Avenue and encouraging bicyclists to use the new crossing at SE 28th Avenue or opt to use the travel lane on SE 26th Avenue will raise the visibility of the cyclist in the roadway as well as increase the likelihood they will be seen by bike and vehicles using other approaches at the intersection. … SE 28th Avenue crossing at Powell has fewer conflict points for bikes and pedestrians than a traditional signal and provides a safe and comfortable location for bike to cross. The City will be installing bicycle wayfinding signs on 26th to encourage bicyclists to cross at the safer location two blocks away rather than using the intersection at 26th and Powell where we have seen a number of serious bicycle crashes in the past year.”

Rich Newlands, the city’s project manager for the 20s Bikeway, confirmed on Dec. 23 that the state had approved the signal at 28th but said he couldn’t comment on the decisions surrounding 26th Avenue. Newlands referred questions about 26th Avenue to city spokesman John Brady, who couldn’t find time in the next two weeks to answer any questions about the city’s decision.

(Brady did send a text message Wednesday saying “we appreciate that there seems to be room to revisit the issue after the much needed signal at 28th is installed.”)

As a result, it’s currently unclear when the city expects to remove the bike lanes, or why it agreed to do so despite its policy to prioritize bike traffic over auto traffic, its designation of 26th Avenue as a future bikeway and the four studies that it had said showed that removing the bike lane would make the street more dangerous.

In August, the state said it feels those studies do not support such a conclusion, but declined to say why.

The post City gives in to state demand to remove bike lanes from SE 26th Avenue appeared first on BikePortland.org.