The bike route west from the Hawthorne Bridge.
(Photo: M.Andersen/BikePortland)

This July, when downtown workers start grabbing big orange bikes to head across the river for lunch at Olympia Provisions, many will make an unpleasant discovery: Downtown Portland has hardly any bike infrastructure.

The good news for those future Biketown customers is that this is set to change. The bad news is that it probably won’t until 2017 at the soonest.

Experienced Portland bike users know that the stoplights in most of downtown Portland are already timed to make it pointless for anyone to drive faster than 14 mph. Our “green wave” is a brilliant bit of invisible (and therefore uncontroversial) bike infrastructure.

But invisible infrastructure isn’t much comfort to people experimenting with city biking for the first time — or for people who simply don’t feel comfortable riding in the same lane as people in cars on crowded and hectic streets.

So Thursday’s bike share sponsorship deal adds to the urgency of a project that has been rattling through the local bureaucracy for three years now: adding one or more protected bike lanes to the downtown street grid. In 2013, Portland received $6 million in federal funds to spend on something it called the Central City Multimodal Safety Project. According to its grant application, the project would include “bikeways that provide more width for cyclists and more physical separation between those bicycling and those driving.”

Which streets would get these nice new bike lanes? That’s been ambiguous so far. By all accounts, the city has resisted writing any plans in stone.

Last May, the city hired a veteran consultant, Rick Browning, to be its project manager. Two days before he started work, he stopped by our office to talk about the project.

Little has happened since, at least in public. 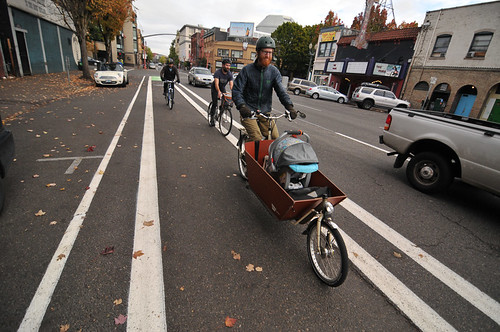 Phase 1 Planning funds became available for this project October 1 2015. In preparation for this funding availability, during the summer of 2015, PBOT, METRO and Portland Parks engaged in an iterative review process of a draft project scope of work and more detailed project budget. The final version of that scope was sent to Metro in September.

The final revised scope and budget was sent to ODOT in October for approval. ODOT is currently reviewing the submittal to release Phase 1 funds. PBOT is working with ODOT to estimate the date for start of funding. While the project is still not funded, PBOT staff have starting work on preparing a consultant RFP that will be issued in early spring with that consultant team and the public process starting in the summer of 2016.

PBOT staff is excited to get this much anticipated project underway.

Dan Kaempff, a planner for Metro who helped oversee the project, confirmed on Thursday that ODOT and the city are continuing to make small revisions to Browning’s scope of work.

Cities which opened bike sharing systems in an effort to show bike-friendly credentials without making major changes to their streets have seen their systems struggle for riders.

PBOT Spokesman John Brady said Thursday that the protected bike lane project, once it’s built, will probably be good for downtown bike sharing. He also noted that downtown isn’t the only place bike sharing will be available.

Still, if there’s one major flaw in Portland’s bike share plan after Thursday’s sponsorship announcement, this is it. Cities like San Antonio, Chattanooga and Denver, which opened bike sharing systems in an effort to show bike-friendly credentials without making major changes to their streets, have seen their systems struggle for riders. Cities like New York and Montreal, which introduced bike sharing after big investments in their central-city bike networks, have seen stronger ridership.

There are also cities like Seattle, where a lack of downtown bike infrastructure may have contributed to a slow start for bike sharing, but where the city is rapidly building infrastructure to help it work. In May 2015, Seattle Mayor Ed Murray made a surprise announcement that a protected bike lane would be on 2nd Avenue in time for the bike share launch. Four months later, a half-mile bidirectional bike lane was on the ground, complete with bike signals.

Portland proved last year that when the stars align, it can move quickly. The new buffered bike lane on 3rd Avenue — project-managed by Browning, as it turned out — is a big improvement for the downtown network.

Portland’s transportation bureau has six months before Biketown starts rolling. Will it bring the same sense of urgency to building better bikeways as it did to building a fruitful partnership with Nike?