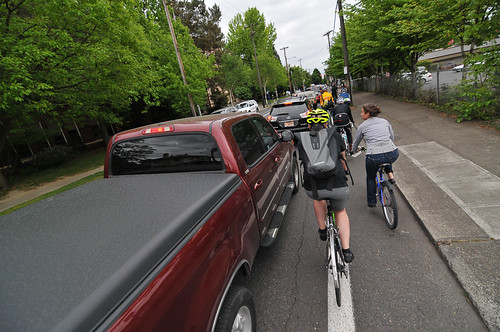 The bike lanes on SE 26th run in front of Cleveland High School and carry about 600 to 800 people daily.
(Photo © J. Maus/BikePortland)

Because 26th Avenue won’t be repaved for another year or two, the city will have time and data to try to persuade the Oregon Department of Transportation to reverse its decision.

The Portland Bureau of Transportation confirmed Thursday that it has agreed to remove the bike lanes from SE 26th Avenue near Powell in order to get the state’s approval for a new signal at 28th.

A city spokesman said that because 26th Avenue won’t be repaved for another year or two, the city will have time and data to try to persuade the Oregon Department of Transportation to reverse its decision. But an ODOT spokesman said the state can’t say what data it might or might not find persuasive.

The new biking-walking traffic signal to be added at 28th will help create a new segment of neighborhood greenway, which the city had hoped would serve as a lower-stress alternative to the flat, direct and uncomfortably narrow bike lanes on 26th.

Whether or not there are bike lanes on a city street wouldn’t usually be up to the state government. But new traffic signals on Powell, a state highway, are the state’s business — and ODOT agreed to the new signal at 28th and Powell only on the condition that the city promise to remove the 26th Avenue bike lanes.

On Thursday, city spokesman Dylan Rivera said that the city will be able to gather data during the window of time, which he described as “one to two years,” after the 28th Avenue signal is installed but before the 26th Avenue lanes are removed.

“PBOT believes our planners and engineers can make a strong case for keeping the bike lanes there,” Rivera said, acknowledging that the decision will ultimately be up to ODOT.

ODOT spokesman Don Hamilton said Thursday that the city is welcome, one or two years from now, to try to persuade the state to change course.

“We can start discussing it again,” Hamilton said.

Last week, ODOT spokeswoman Kimberly Dinwiddie said that if bike traffic on 26th exceeded city “projections,” the state would “revisit” its decision to require the bike lanes’ removal. But the projections she apparently referred to had considered a scenario in which there was no northbound bike lane on 26th.

Dinwiddie was out of the office Thursday and referred questions to Hamilton.

Hamilton said ODOT can’t speculate on what sort of data it might or might not find persuasive in two years.

“We don’t know what information it would raise,” he said.

The post City has two years to make the case to save 26th Avenue bike lanes, it says appeared first on BikePortland.org.