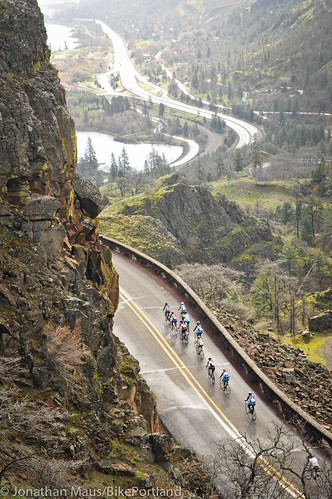 More bikes in the Gorge is a very good thing.
(Photo: J.Maus/BikePortland)

If you’re interested in helping the Columbia Gorge keep ascending into the pantheon of world-class cycling destinations, Travel Oregon wants to help you.

The extremely bike-friendly state tourism organization has selected the Columbia Gorge for its “Tourism Studio Program” in 2016. This is “a professional bi-state development program designed to bolster the region’s tourism economy while maintaining its rich environmental and cultural assets.” After the same program was implemented in Clackamas County in 2011, that region witnessed a blossoming of bike-related tourism projects and initiatives.

The Oregon Department of Transportation’s continued connection and improvement of the Historic Columbia River Highway has been combining with enthusiasm by people up and down the Gorge who see their area’s huge potential for tourism that has low environmental impact but big economic impact. We’ve been covering all of this as it has come together in recent years, and it looks like we’ll have plenty more to cover in the years to come.

The workshop series will include hands-on skill-building, planning, and product development workshops full of information and networking opportunities. Community leaders, public agencies, industry associations, tourism entrepreneurs, tour operators, lodging property owners, restauranteurs, and anyone with an interest in strengthening the local economy through tourism are invited to participate in the program. Workshops run between January and April of 2016. The participation cost of $10 includes lunch. You can learn more here.

Pre-registration is required. For more information: 509-427-8911 or casey@skamania.org.

In addition to this state-sponsored tourism development, the Gorge is also pegged for better transit. ODOT is hosting a survey about possible improvements to public transit along the corridor. To weigh in or share expertise, check it out. The Gorge is primed to jump on the statewide trend of bike tourism benefitting from transit improvements.

The post Travel Oregon tourism workshops and better transit coming to the Gorge in 2016 appeared first on BikePortland.org.