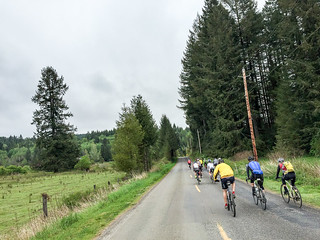 Find a place to air out your jacket, Portland — it’s been pretty wet out there. Let’s warm you up with the bike links from around the world that caught our eyes this week:

Gravel race: 1,400 riders signed up in 15 minutes for a Kansas gravel grinder; the remaining 500 tickets were gone in two hours.

Mandatory flags: A bill in Missouri’s legislature would require anyone riding a bike on lettered country roads to have a 15-foot-high fluorescent flag.

Biking to learn: A group of New Jersey first graders are using desks with pedals because studies say it aids concentration.

Love quest: Indian street artist PK Mahanandia couldn’t afford a plane ticket, so he pedaled from Delhi to Vienna to follow the woman he’d fallen for.

Car bubble: The new-car financing industry has figured out a way to play hot potato with bad car loans, because that sort of thing always ends well.

Bikes and gentrification: Researchers say bike infrastructure is more likely to arrive in neighborhoods where the share of homeowners and college grads is rising, but which causes which?

Barricades arise: “I would like to give Parisians back the space that cars have taken from them,” says Anne Hidalgo, the mayor of Paris.

Street library: Los Angeles now has one. On a trike, of course.

Interested but concerned: For the first time, the famous phrase coined to describe would-be bikers in Portland has been shown to apply nationwide.

Sharp trike: Just look at it.

City lawsuit: A 59-year-old man who apparently flipped his bike on a cable in a Vancouver street is suing the city for failing to mark it.

I-5 Bridge: Public radio’s Marketplace did a five-minute spot summing up the stasis that followed the CRC debacle.

Collision fury: A Brooklyn writer has some intemperate advice on “how to stop hitting me with your car.”

Out of mind: A Portland scholar found that people who never bike are way, way less likely to respect bikes on the road.

Parking causes driving: It’s not the other way around, a new study concludes.

Elite demographics: A proposed New York City bill would reveal the number of community board members who own cars.

The post The Monday Roundup: The gravel boom, biking while high and more appeared first on BikePortland.org.