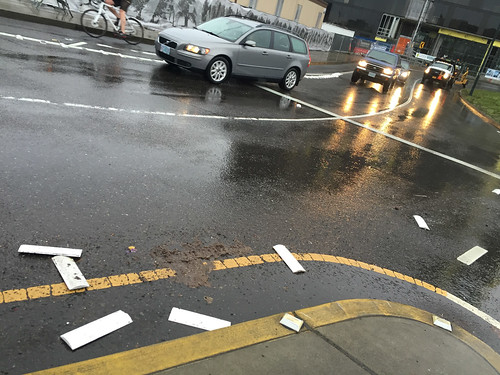 A few of the ripped out rumble bars.
(Photos © J. Maus/BikePortland)

Illegal driving and the force of car tires has made quick work of the new “rumble bars” installed on the Couch curve where it winds onto the Burnside Bridge.

On January 8th we reported that the Portland Bureau of Transportation added 70 of the round bumps in an effort to prevent people from driving in the bike lane. Keep in mind that it’s not only unsafe to encroach into a lane dedicated to cycling, it’s also against the law (ORS 811.435). But for some reason, many people driving into downtown Portland feel like that law doesn’t apply to them.

PBOT installed these bars to encourage safe and legal driving. Unfortunately, as of this morning, more than one-third of the 70 bumps have been ripped out and are currently strewn about the roadway. At this rate, by the end of the month there will be no bars left. 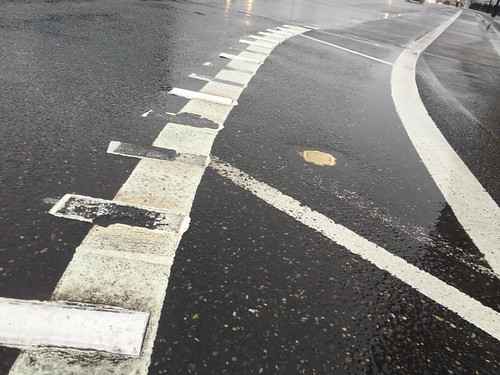 KGW-TV news reporter Chris Willis was the first to tell me the bars had been ripped out. He interviewed me about it for their story that aired last night:

PBOT says these rumble bars were installed as part of a test, “to give people who are driving an audible warning and vibration when they encroach into the bike lane.”

PBOT spokesman John Brady said they’re aware of the issue and the city plans to replace the bars once they find stronger epoxy. There’s no date for when that will happen.

Even with stronger glue, I’m concerned that these rumble bars aren’t doing enough to change people’s illegal and unsafe behaviors. As shared in the KGW report, maybe it’s time for PBOT to stop with these half-measures and just install some good old-fashioned physical protection. The City has determined that the need exists to protect this bike lane and the people who use it, so they need to make sure their method of providing that protection actually works.