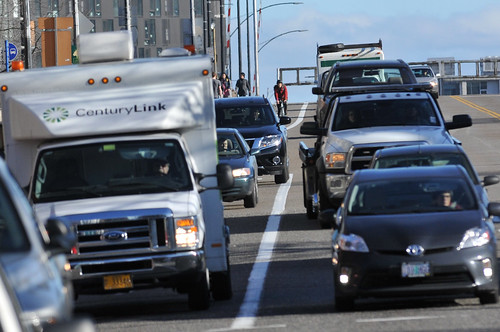 The person cycling in the upper part of this image is in a bike lane, but not for long.
(Photos © J. Maus/BikePortland)

Welcome to Gap Week! This is our first in a series of posts where we’ll take a closer look at those annoying places where the bike lane ends.

As we shared in our intro last week, we’ve chosen four gaps where a bikeway abruptly drops then picks up again just a few blocks later. Our goal is to put these gaps on the radar of the community and staff at the City of Portland so we can get them closed as soon as possible.

Our first gap is one many of you are likely aware of: westbound Burnside Bridge between 1st and 3rd. Here’s a map for reference: The bikeway on the Burnside Bridge isn’t anything fancy, but it’s many peoples’ favorite. Unlike our other bridges, the Burnside is relatively flat and because it’s a bike lane and not a multi-use path, it doesn’t get crowded with other users who are walking, jogging, and so on.

Heading westbound (into downtown), the bike lane is 5-6 feet wide. Then it unceremoniously stops right at the big “Made in Oregon” sign. Along with the bike lane, Burnside has two standard lanes in this section. The bike lane drops to make room for a right-turn only lane which starts just about 160 feet west of the end of the bike lane. People drive about 30 mph or so here and with the slight downhill leading toward 2nd Avenue, bicycle riders can easily approach 20 mph. Right where the bike lane drops there’s a TriMet bus layover zone and then an auto-parking lane pops up. This means you’ve got to merge over toward the left whether you plan to turn right (north) on 2nd or continue straight to 3rd (and beyond).

The section from the bike lane gap to 2nd Avenue isn’t too bad because you’ve got space to operate in the right-turn only lane. But if you want to continue west on Burnside, you’re forced to share a busy traffic lane or squeeze between other traffic and on-street auto parking (not recommended).

Merging from the bike lane into the other travel lanes at these speeds and in this environment is far from the low-stress conditions Portland is aiming for.

Here are several more photos of how it looks today… 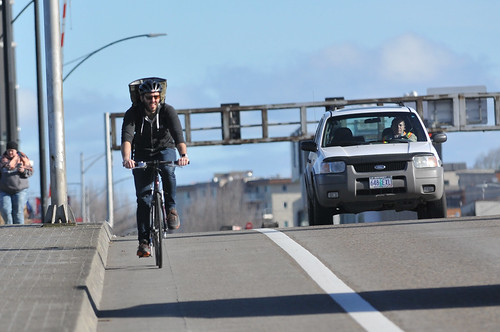 Before the gap (looking east). 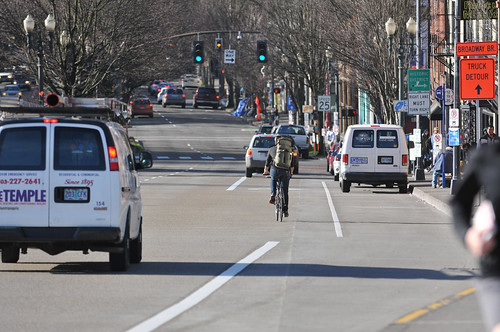 After the gap (looking west). 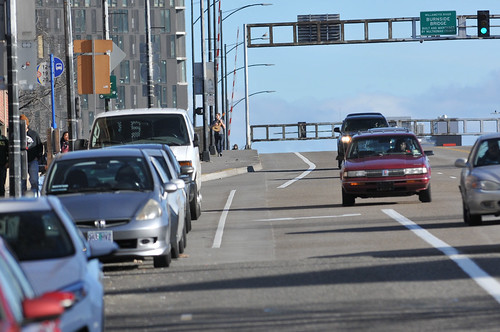 Where the bike lane ends and the turn lane begins (looking east). 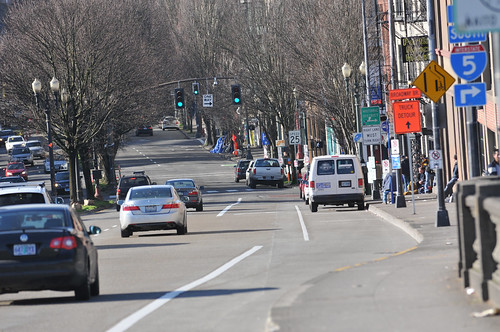 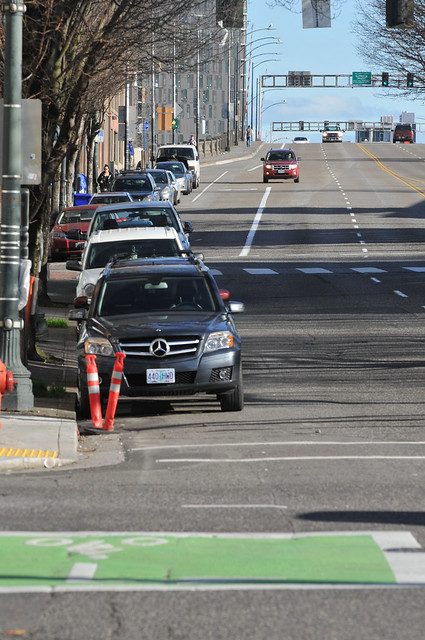 The bike lane in the background, then the gap, then the bike box on NW 3rd in the foreground. PBOT currently uses 8-10 feet of the roadway for an auto parking lane. I counted about 12 spaces west of 2nd and another 7-8 spaces between 2nd and 3rd. 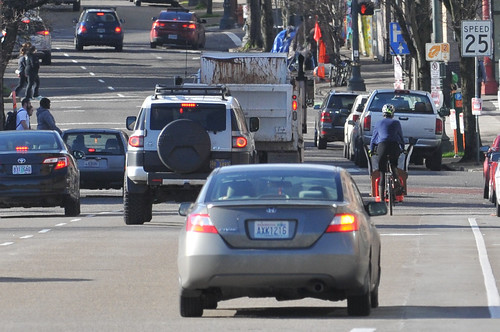 This rider is about to enter the pinch-point between 2nd and 3rd. 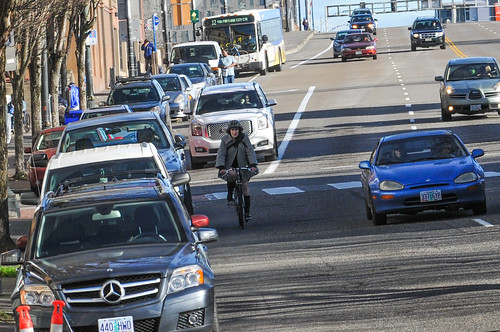 Riding in the pinch point between 2nd and 3rd.

The Burnside Bridge is an important route that handles bicycle traffic from inner northeast and southeast. In 2014, the Portland Bureau of Transportation estimated there were about 2,200 people who rode past East Burnside and 6th every day (a location that feeds onto the Bridge). Compared to the other four major downtown bridges, Burnside is second-to-last in popularity with about 2,300 average daily trips (that’s about three times as many as the Morrison and about half as many as the Steel).

PBOT recently striped a new bike lane on 3rd Avenue that provides dedicated cycling space along a destination-rich corridor. Unfortunately, the bike lanes on the Burnside Bridge don’t connect to them. There are only 754 feet (about 0.14 miles) between the newly painted green bike box on 3rd and the end of the bike lane on Burnside. PBOT knows many people take Burnside to (southbound) 3rd because they’ve positioned this bike box to act as a two-stage left turn box to encourage the movement.

Speaking of PBOT, we asked them about this gap. They said they’ll “be looking at it” as part of their Central City Multimodal Safety Project. That project aims to build a network of new downtown bikeways and PBOT says it will begin planning them this summer. As for this gap in particular, PBOT told us “Public outreach and analysis will be needed to come up with a preferred design.”

There should be an added sense of urgency around this gap because as we reported earlier this month, Portland’s new bike share program could be up-and-running before the public process for the downtown bikeway project has even begun.

Stay tuned for our next gap. And we’re still taking submissions from readers. Tag your gaps with #GapWeekPDX or drop us a line with the location.