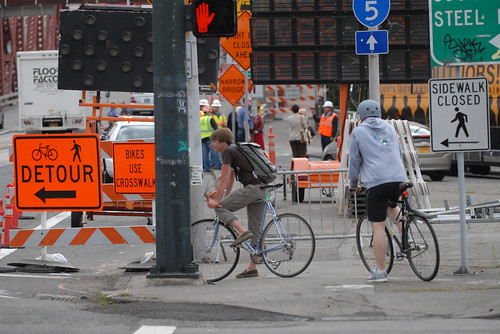 Get used to it.
(Photo: J. Maus/BikePortland)

There’s more bad news to report about your ride over the Broadway Bridge.

The bridge has been a construction zone since this past summer when Multnomah County embarked on a major repainting project. For months now, people have struggled with intermittent closures, extremely loud blasting noises from the construction work, and a very narrow lane.

Now the County says the path on the north side of the bridge (westbound) will be closed for up to a month so contractors can remove and paint the handrail. The closure started this past Monday (1/25).

No word yet on whether the County plans to repaint the southern path as well.

This project was initially scheduled to wrap up in March, but the latest news from the County is that it won’t be completed until April.

If you experience hazardous conditions during this project, here’s the County’s contact information.

The good news is that once this project is done, the bridge will look mighty fine. Have you noticed some of the sections that have already been finished? It looks great!

The post The westbound path of the Broadway Bridge will be closed for a month appeared first on BikePortland.org.