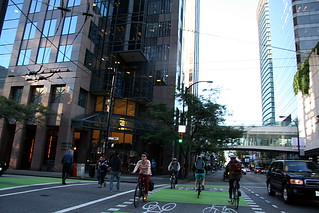 We explored downtown Vancouver BC in a 2013 post.
(Photo: M. Andersen)

This week’s Monday Roundup is sponsored by the 15th annual Worst Day of the Year Ride, coming your way on February 14th.

“Mechanical doping”: Hidden electric motors are the latest way to cheat in a bike race, apparently.

Pronto bailout: Seattle (home to a mandatory helmet law and a downtown surrounded by hills, it’s worth noting) is considering a $1.4 million purchase of its little-ridden, money-losing nonprofit bike-share system.

Uber safety: The hail-a-ride company is testing ways to track its dangerous drivers.

Cards Against Urbanity: The party game for city wonks was “on every planner’s wish list this past Christmas.”

“Minimum grid”: The coinage by Toronto-based advocate Gil Penalosa is a major rallying cry as the city considers a protected bike lane network built over the next two years.

Population boom: “We have a crunch coming,” warns Ashok Sinha of the London Cycling Campaign. “Cycling is one of the ways we’ll be able to keep this city moving.”

Commute inequality: In the Bay Area, low-income commute times have nearly doubled since 2010, while middle-class commute times are flat.

Housing infill: Increasing the number of homes in neighborhoods that are already bikeable is just as important as spreading bike infrastructure, says Seattle Bike Blog.

Mandatory stops: South Dakota has killed a law that would have required people biking to pull over and stop if a faster vehicle overtook them.

L.A. transit: Streetsblog LA does a nice job slashing up a scary Times headline about allegedly declining transit use.

Blizzard priority: Why does even a city where most people don’t drive still shovel streets before sidewalks?