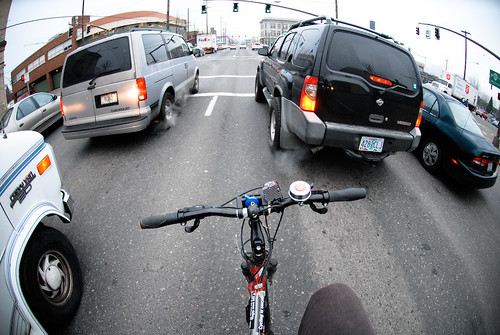 It turns out when people have route options, they choose healthier ones.
(Photo: J.Maus/BikePortland)

Last week’s news that a glass factory on SE 21st Street seems to have been emitting “alarming” levels of arsenic and cadmium has many Portlanders who bike through the area worried.

The recommendation for practice is to provide low-traffic routes wherever possible in bicycle networks, not to limit bicycle facilities on high-traffic streets.

After all, as we wrote in 2014, people biking ingest more pollution per second because they breathe harder.

But as it happens, the same Portlanders behind that 2014 study of biking and air pollution recently came out with a different finding: helping people avoid air pollution while they bike is one more reason to build a biking network.

As explored by Portland State University scholars Alex Bigazzi, Joe Broach and Jennifer Dill, it’s a simple concept, really: if you give people more routes to ride comfortably, they will be better able to avoid riding through pollution.

And indeed, the research team used Bigazzi’s self-made pollution-testing apparatus to determine that people do actually tend to better avoid pollution when they have good biking route options.

Presumably, this is in part a response to one possible misinterpretation of Bigazzi’s prior research into air pollution. Bigazzi found, unsurprisingly, that streets with lots of cars have lots of air pollution. It’d be possible to conclude, from this, that it’s better to build bike networks away from large streets so people won’t be tempted to bike there.

But as Bigazzi has pointed out in previous research, proximity isn’t the only factor in pollution exposure. The other is time. If a direct route has slightly more pollution than a winding one, it might still be better for your lungs because you’re spending less time in the pollution.

This latest study brings some numerical heft to the discussion. When an interlacing network gives people a rich set of route options, they tend to be decent at choosing good ones.

Another thing to keep in mind here is the underlying fact of all health-related research on biking: The health costs of not biking are generally far larger than any health costs of biking.

This air pollution news from Southeast (and today’s follow-up about a second, smaller pollution hub just north of the Rose Quarter) is a useful reminder of another of Bigazzi’s findings from his previous study: cars are a big air-pollution problem, but they’re not the only one cities face. 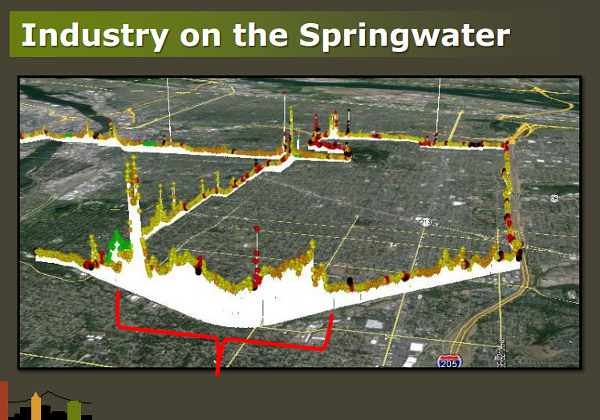 A slide Alex Bigazzi’s 2014 presentation about pollution he detected on Portland bike routes. Industry along the Springwater Corridor sends more pollutants into the air than cars on nearby big streets do.

Pollution is bad for everyone nearby, and a good bike network is no solution to the larger problem. But this paper is a useful reminder of the many ways that bike networks aren’t merely about appeasing an interest group or manipulating a behavioral shift. They’re about empowering people to help themselves.