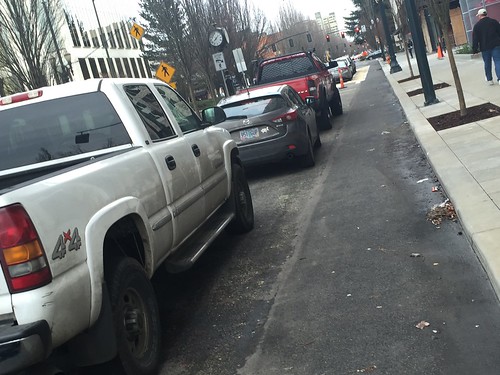 There are a lot of reasons why using only paint to separate bicycle operators from motor vehicle operators is problematic. Today I’ll share an example that speaks to the importance of maintenance.

On February 6th I rode on Northeast Multnomah through the Lloyd District. I don’t usually ride here but I wanted to check-in and see how one of Portland’s most important bikeways is holding up. I say most important, not because of the number of people who ride on it (it’s underused because the street has yet to fully transform into the residential/retail hub it will soon be); but because of its political and engineering context.

The Multnomah bikeway was created through a rare partnership between the City of Portland and business/real estate interests. And, as far as bikeway designs go in Portland, it’s one of the best we’ve got. It’s got more separation than the lanes on SW Stark and Oak, it’s longer than the parking-protected bikeway on Broadway near Portland State University, and it was a lot cheaper than the true “cycle tracks” on SW Moody, NE Cully, or SW Multnomah.

Because so much of Portland’s bikeway miles are created only with paint, upkeep and maintenance is critical. When paint and markings wear off, the bikeway literally vanishes. So for those of us who rely on them, paint is our infrastructure.

When I rolled through last week the bikeway had all but vansished on the block east of NE 7th. As a result of the “beeswax” yellow paint in the buffer zone wearing off almost completely, people parked right on top of the buffer zone — which is meant to provide separation of uses, not as a place to park cars. 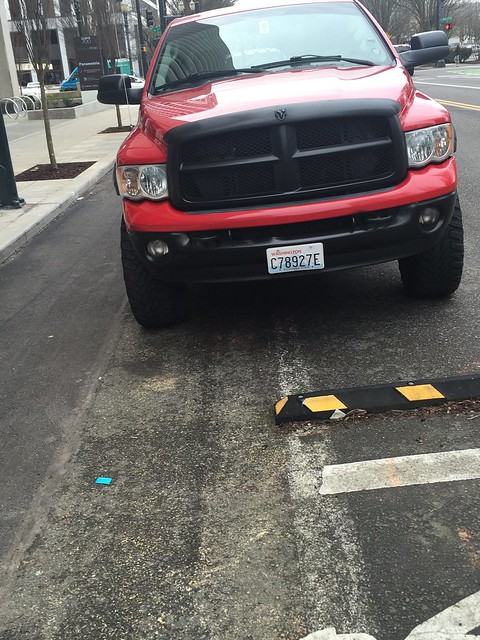 Compare these two images above with how this project was initially sold to us by the city (sort of like those images in McDonald’s ads versus what the burgers actually look like): If only.
(Graphic: PBOT)

As I rode east toward NE 9th (where a new grocery story is coming soon) the buffer paint looked a lot better. And lo and behold, people didn’t park on it (well, not as blatantly)! 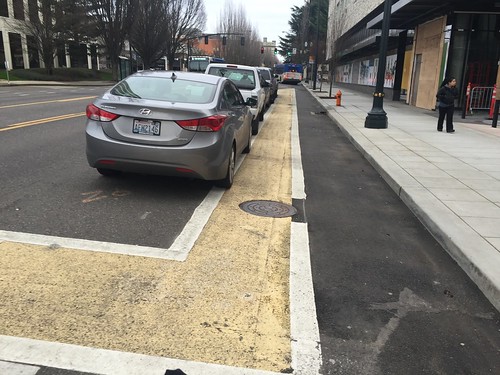 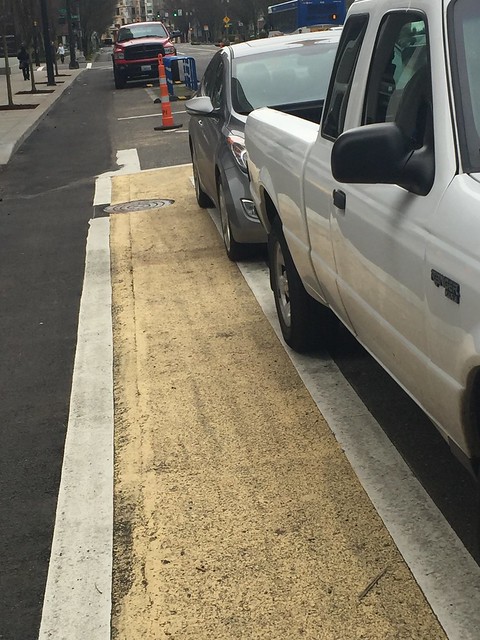 The visibility of paint alone gives bicycle riders an extra
2-3 feet of breathing room in the foreground versus the background.

This seemed like an excellent (albeit non-scientific) example of why maintaining bikeway markings and paint is so important. Of course, all this could be avoided if we improved these unprotected bikeways with real, physical objects to separate them. But that’s a post for another day.

UPDATE: A source in the Lloyd District sent us a photo showing that PBOT has just added a new white stripe and bike lane character in this location (see below). Not sure if they were spurred by our February 6th Tweet or what, but it’s good to see this. Also good to hear PBOT is working with Go Lloyd organization on a more sustainable maintenance plan. We’ll keep you posted: The post On bikeways, paint matters when it’s all we’ve got appeared first on BikePortland.org.