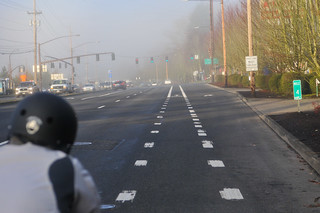 Surrounded by investments in everything else.
(Photo: J.Maus/BikePortland)

“Why is Portland-ish planning not spreading more rapidly?”

That was the question BikePortland reader Paul asked on Monday morning, after reading about how the Danish rust-belt city of Odense is rebuilding its economy around livable streets. It’s a great question, and it got a great answer from BikePortland reader Anne Hawley.

Anne went back to the 1800s for an analogy of how too many U.S. cities went astray and have stayed that way:

I wish I knew the answers. I don’t. But I feel like there’s an analogy to be found in the story of telephone service. Exceptional, powerful, rich-and-rolling America went whole hog into running copper wire everywhere in the late 19th and early 20th century. Because we had a fully built out, functional, and profitable phone system when cellular came along, the titans of the phone industry tried to fit cellular to the old, wired-network model. It took us YEARS to break out of the stupid pricing plans and restrictions that they put on this “competing” service.

Meanwhile, the developing world, never having strung the expensive copper in the first place, has gone hog-wild with cellular, leap-frogging us in inventive uses for the system, with wide deployment (even to the poor! OMG!).

So now we’ve got one of the slowest, most poorly-deployed, most restrictive cellular business models in the world. Those dinosaurs died hard.

Maybe other cities are on the verge of jumping into a brand-new system, an urban transportation model that doesn’t quite exist yet, a toolbox made of parts from Portland AND Copenhagen AND Singapore AND Los Angeles AND Tactical Urbanism. I don’t know. There are dinosaurish elements to Portland that other cities would be wise not to follow when newer models are coming along.

This isn’t a definitive answer, as Anne notes. And if there’s a transportation model from the developing world that is successfully slowing the spread of cars with wealth by creating a radically better transportation network, I’m not aware of it.

But maybe she’s right that someone, somewhere that the costs of building everything around cars haven’t sunk in quite as deeply yet, is on the cusp of figuring the better way out.

Yes, we pay for good comments. This regular feature is sponsored by readers who’ve become BikePortland subscribers to keep our site and our community strong. We’ll be sending $5 and a little goodie bag to Anne in thanks for this great addition. Watch your email!

The post Comment of the Week: How the history of cell phones explains American streets appeared first on BikePortland.org.