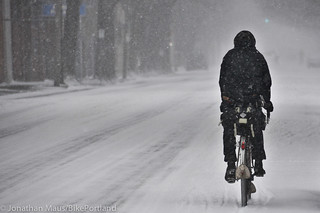 Snowy biking: People who ask why anyone would do it forget about its beauty, writes Anders Swanson.

Bike gang: A gang of masked vandals on bicycles has been demolishing expensive cars in gentrified Berlin neighborhoods.

Hit and run: The chief operating officer at Kaiser Permanente Dental Associates got a misdemeanor charge after fleeing (first by car, then on foot) the scene of a collision at NE Broadway and 24th that left a woman with a traumatic brain injury.

Robot drivers: They can now legally exist, according to the federal government.

2030 predictions: Ten percent of new cars might be shared and up to 15 percent might be self-driving, predicts McKinsey, but this’ll vary greatly by “city type.”

Partisan biking: The conservative Weekly Standard seems to be saying Rep. Earl Blumenauer’s proposal to scrutinize whether transportation projects would accelerate global warming is a bad idea because it might improve biking.

Bike lane parking: Apparently it’s legal in Vancouver, The legality of parking in a bike lane isn’t clear in Washington state law, but the city is proposing to change that (*see update below).

2,418 fatalities: Lower gas prices have spurred more driving and caused approximately as many additional deaths in the first nine months of 2015 as the number who died in the Twin Towers. The 9.3 percent rise was the biggest one-year spike since 1946.

Oregon’s boom: The state had the nation’s strongest economy in 2015, Bloomberg calculated.

Dangerous crosswalks: The bicycle and pedestrian coordinator in St. Louis says that making crosswalks colorful might get somebody killed.

Good planet: The world is a much friendler place than he thought, says a British doctor who just spent six years biking around it.

UPDATE, 2/16 at 10:10 am: We just received this clarification from Jennifer Campos at City of Vancouver about the bike lane parking story: “Parking in a bike lane is illegal in Vancouver per different sections of the Revised Code of Washington (RCW). We are adding language to our code to make it clear and specific as the State RCW doesn’t explicitly say it is illegal.” – We regret any confusion.

The post The Monday Roundup: The joys of snowy biking, Berlin’s bike vandals and more appeared first on BikePortland.org.