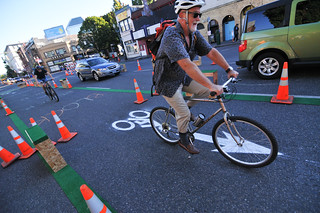 The volunteer street transformers at Better Block PDX are kicking off what they call “a transformation moment for our organization” at a “volunteer appreciation party” Thursday night.

It’ll be a starting gun for the first full year of what the group hopes will be an ongoing conveyor belt of new ideas for Portland streets, with help from Portland State University’s pipeline of aspiring planners and engineers.

PORTLAND, OREGON‐ Leaders of the group Better Block PDX will announce its four upcoming projects at its first annual volunteer appreciation party. Better Block PDX is a group of public space advocates who have utilized temporary materials to show alternative ways for how street space can be reallocated to improve safety, livability, health, and happiness.

“This is truly a transformation moment for our organization” said Ryan Hashagen, a volunteer for Better Block PDX, as he announced the upcoming projects. Ben Chaney, another volunteer, said, “After over six months of brainstorming, collaboration, and vetting, we are excited to get the ball rolling on our 2016 projects.” The projects were selected based on feedback with community members and graduate students at Portland State University. The goal is to showcase a temporary street reconfiguration later this year; specific street designs will not be made until after significant community outreach.

The 2016 projects will be unveiled tomorrow and all projects are dependent on variables including but not limited to funding, volunteer capacity, and permitting.

Leaders will also announce that Better Block PDX has submitted paperwork to become its own non‐profit.

Previously, the group was under the non‐profit Umbrella, an organization that handles administration for a number of non‐profits. Better Block PDX is appreciative of the assistance Umbrella has provided.