Survey data released by the city Wednesday show a continuing upward climb in active transportation to school. Among Portlanders in kindergarten through fifth grade, walking, biking and otherwise rolling to school became more common than traveling in the family vehicle sometime around 2010 and has more or less kept climbing since.

If the trend continues, more than half the city’s primary schoolers will be walking, biking, skating or scootering to school by 2025 or so.

It’s worth noting that riding in a car isn’t the only thing becoming less common; riding a school bus has been, too. Here’s the detailed trend. (Note that unlike the chart at the top, the last few data points include students from grades 6-8 as well as younger ones.) The city breaks out survey data by school. If a school you care about has been surveyed, the latest data is here.

Coincidentally, the news comes just as the For Every Kid Coalition delivers a big bundle of testimony to Metro in favor of creating a regional Safe Routes program. The coalition’s $15 million ask would include a bit for instructional classes (that the Bicycle Transportation Alliance might teach), but mostly for biking and walking-friendly infrastructure improvements to the streets immediately surrounding Portland-area schools. 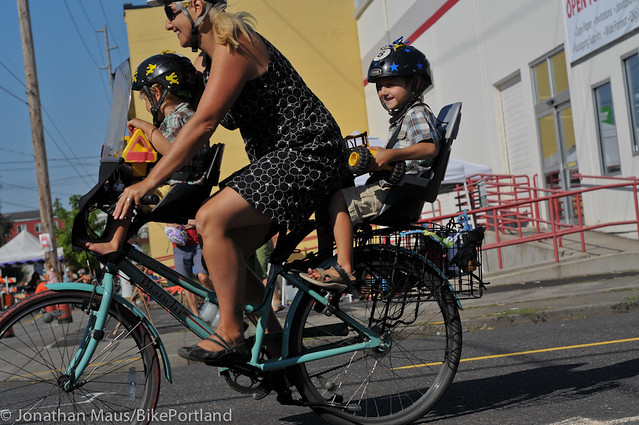 Portland voters will also have an option to give their own booster shot to these efforts in May when they consider a 10-cent gas tax hike that would send a large share of its proceeds to biking and walking upgrades to streets near Portland schools.

The post Driving to school hits a new low in Portland after 15 years of ‘Safe Routes’ appeared first on BikePortland.org.