Bike Loud PDX — Portland’s upstart, all-volunteer bike advocacy group — is not going anywhere. In fact, they’re growing, maturing, and likely to get much louder in the coming months and years. I attended their general meeting on Sunday to see what they’re up to and get a feel for what the future might hold.

Bike Loud launched in August 2014 with a single comment by Alex Reed. “Anybody interested in starting a louder voice for cycling in Portland email me,” he wrote under a BikePortland post about the state of the Bicycle Transportation Alliance. “If we get a few people, we’ll meet for drinks and a ride sometime soon!” The emails happened. So did the meeting and the ride shortly thereafer. 18 months later Bike Loud hasn’t slowed down and they’ve chalked up an impressive string of successes.

Their very first campaign forced the Portland Bureau of Transportation to install traffic diverters on the Clinton Street Neighborhood Greenway. It was an issue that plagued the community for years. People were frustrated at the increase in driving on what was supposed to be a low-stress bicycling route. But the political will to physically impede auto traffic was not there. Bike Loud created that political will by harnessing riders’ frustrations, taking their demands directly to City Hall, organizing the grassroots, and building support among neighborhood businesses. They also did their research. They studied the street’s traffic patterns and proved to PBOT and City Hall staffers that there was intellect behind the anger. Bike Loud’s work on Clinton helped hasten the creation and ultimate City Council adoption of the neighborhood greenway report. That report is what gave PBOT the policy cover to finally install the diverters — 17 months after Bike Loud’s first protest ride on the street. 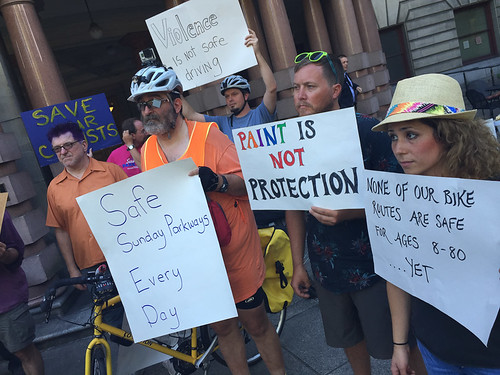 I’ve seen several groups come and go. They usually organize in response to a specific concern and then ultimately fizzle out over time. But Bike Loud seems to have staying power. Since Clinton they’ve thrown their weight behind traffic diversion on Northeast Rodney, held a die-in and a vigil in front of the Oregon Department of Transportation headquarters in downtown Portland, and have continued to write letters and stay engaged on many issues that pop-up on their vibrant email list. At their meeting in the KBOO radio studios on Sunday their agenda was so full meeting leader Terry Dublinski-Milton (a veritable force of nature in local transportation and neighborhood activism circles) had to cut several things just to fit it into the three-hour timeslot.

The entire first hour was devoted to organizational structure. Establishing rules and order isn’t as fun as planning the next direct action, but it’s crucial if a group wants to survive to protest another day. Bike Loud elected a direct action coordinator (Soren Impey) and three co-chairs last may (Emily Guise, Ted Buehler, and Jessica Engelman). Now they’re working to establish a board. “We’ve been ad-hoc all this time, now we need capacity,” said Dublinksi-Milton. As they debated issues like the size and voting structure of the board, things got heated. This is the moment in a group’s rise where things can fall apart, when a passion for the cause spills over into hurt feelings and personality conflicts. While this was a vigorous discussion, the group kept their eyes on the prize, respected different viewpoints, and made several significant decisions.

When the agenda moved to projects and policies, the scope and potential of this group came into focus. They discussed a number of issues including: a growing collaboration between Bike Loud and homeless advocates around the public camping issue; a rising disdain for the 20s Bikeway project, concrete suggestions to improve it, and an upcoming direct action to raise awareness of its shortcomings; an opportunity to influence an ODOT project on Highway “Dirty” 30; and the formation of a “Safer Ankeny” subcommittee to (hopefully) mimic their success on Clinton as PBOT readies diverter plans for that street.

The meeting covered a lot of ground. I was impressed with both the quantity and quality of the discussions and I left feeling much better about the future of Portland’s bike advocacy ecosystem.

Bike Loud is currently registered as a corporation with the State of Oregon while they explore options for nonprofit status. You can become a “member” by showing up to meetings, taking part in their events, and joining to their email list. Learn more at BikeLoudPDX.org.

The post Bike Loud PDX is getting louder appeared first on BikePortland.org.