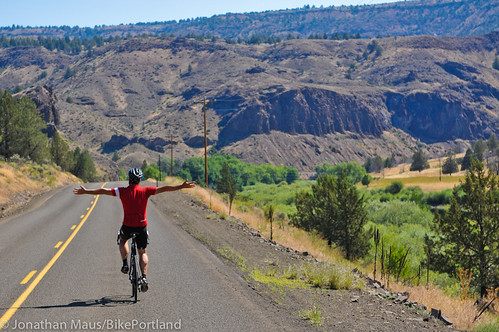 A section of the route just east of Spray on the John Day Highway.
(Photo: J. Maus/BikePortland)

A state parks advisory committee that met in Salem today voted to officially designate the Painted Hills Scenic Bikeway. The new bikeway becomes the 15th route in the scenic bikeways program which is administered by the Oregon Parks and Recreation Department.

The 130-mile route is made up of a loop and three spurs bordered by the John Day River on the east, the Ochoco Mountain to the south and the Warm Springs Tribal Area to the west. Here’s more from the route description:

The Painted Hills Scenic Bikeway meanders through the multi-colored John Day Fossil Beds on 130 miles that connect the small communities of Fossil, Service Creek, Spray, Kimberly and Mitchell and the John Day Fossil Beds National Monument. Viewed from your bicycle seat, you can see millions of years of history revealed in the layers of earth, one color at a time.

The hills get their name from the delicately colored stratifications in the soil—ribbons of yellows, gold’s, blacks, and reds formed millions of years ago by shifting volcanic islands. The ancient plant and wood fossils found here reveal 50 million years of animal evolution. You’ll ride through land were early cousins of elephants and rhinos once roamed.

The Bikeway is a loop made up of a series of hilly, remote out-and-back rides through high desert. One stretch runs along 20 miles of the John Day River, and another treats you to views of the Sutton Mountain Wilderness Study Area.

You can start and end your ride in any of the communities on the Bikeway; each has amenities and supplies, plus a small town to explore. Many parks and interpretive areas along the route have restrooms and drinking water. The moment you leave town, you’ll savor the solitude – it’s just you, your bicycle, the sounds of the birds and the glorious views.

If you’ve never visited the Painted Hills area, now’s the time to plan your trip. And with a bikeway designation you’ll have all the info you need to do it by bike.

The scenic bikeways program aims to highlight the very best bike routes in Oregon as a way to promote regional tourism and economic development. Each route comes with detailed maps, camping and service information, and route-finding signage. Learn more at RideOregonRide.com.