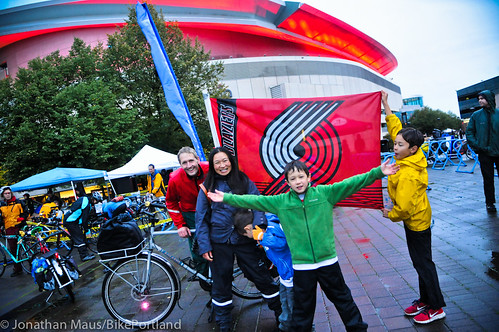 In case you haven’t heard, the Portland Trail Blazers are one of the hottest teams in the NBA. After saying goodbye to four of their five starters in the off-season everyone had written this team off. But now they’re sitting comfortably close to the upper ecehelon of the Western Conference and are poised for a playoff run.

So how about getting some friends together and biking to a game? If that sounds like fun, Blazers Bike Night on April 6th would be the perfect time to do it. This season marks the 10th birthday of BikePortland’s involvement with the Trail Blazers. It all started in 2006 when a few dozen of us rode from the Lucky Lab on Southeast Hawthorne to the Rose Garden Arena (I still miss that old name) to root for the home team. 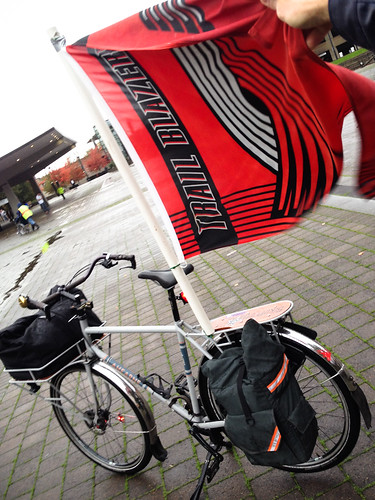 This year I’m happy to report that the Blazers have adopted the event as one of their own. That’s right: Blazer Bike Night is now an annual part of the Blazers schedule. In fact, our friends at the Blazers tell us that other NBA teams have taken note and are looking to do their own bike night events. The cool stickers they made just for us!
Buy a ticket and you’ll get one.

Here in Portland, the Blazers organization has made Bike Night part of their “Sustainability Series Green Games” and the upcoming April 6th contest (against a very good Oklahoma City Thunder team) is their official transportation-themed night. This was our goal all along. To have the event become a larger part of the Blazers plans so that cycling — not just to the games (which isn’t an option for a lot of Blazer fans) but in general as a great way to get around — could get the publicity and attention it deserves.

You can become a part of this awesome cross-community event by grabbing a few tickets and joining us. Tickets start at just $20. Go to the special Bike Night website to find your tickets (make sure to enter promo code “BIKE” to get special pricing). Every ticket purchased comes with a custom reflective pinwheel logo sticker and enters you into a raffle for a helmet signed by Blazers’ team leader, up-and-coming rapper, and all-around good guy Damian Lillard.

Bicycles and basketball are the two loves of my life (besides family of course) and this partnership with the Blazers is very special. To everyone who has supported this event over the past 10 years… Thank you!

The post Join us for Blazers Bike Night on April 6th! appeared first on BikePortland.org.