It’s been four and-a-half years since Metro employee and Cycle Oregon volunteer Mark Bosworth went missing. It was the evening of September 16th, 2011, the final night of Cycle Oregon, when he said goodnight to friends and walked toward his tent. He was never seen again.

While Mark is missed immensely by his family and friends, his name lives on through the Mark Bosworth Fund. The 501c3 fund exists to make it possible for new riders who otherwise couldn’t afford the $985 entry fee for the week-long Cycle Oregon ride. Since it was launched in 2013 the fund has sponsored nine first-time riders — most of them under the age of 30 which is about 15 years younger than the average participant. 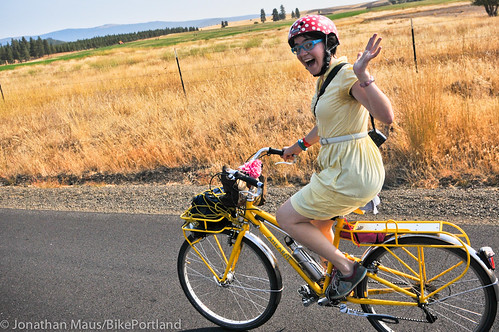 If you’ve ever imagined yourself doing Cycle Oregon’s legendary Week Ride but weren’t sure you could pull it off on your own — or perhaps know someone who’d be a good fit for this opportunity, now’s the time to step up.

The application period just opened and they’ll accept submissions until March 15th. Winners will be announced on April 18th which will give the winners five solid months to train and prep for the big ride. This year’s much-anticipated route heads to the southwest Oregon Coast.