After years of fighting, a “grand bargain” on affordable housing passed Oregon’s legislature this week. But it won’t begin shaping Portland’s bikeable neighborhoods until after the city council takes action of its own.

Representatives for Mayor Charlie Hales and his council colleague, Housing Commissioner Dan Saltzman, say that plans to do so are already underway.

Any city plan seems certain to include some level of “inclusionary zoning,” a measure that could require that up to 20 percent of units in some new buildings be sold and/or rented at discount prices to people who make less than 80 percent of the median income. (As of 2015, that 80 percent figure means that a family of three that makes less than $52,950 would qualify for the reduced-rate units.)

But many questions remain. In which neighborhoods would the rule apply? Will developers be allowed to build higher, or exempted from expensive requirements such as auto parking, to make up for their losses from those discounted rents? Will inclusionary zoning be coupled with other changes such as re-legalizing duplexes or garden apartments or charging a “linkage fee” on all new development? Developers will also have the option to get out of the inclusionary zoning requirement by paying into a city affordable housing fund; how high will that fee be?

All of those decisions will be made by cities like Portland, probably in the next few months.

Because migration to Portland boomed during the Great Recession just as the construction rate plummeted, the city’s population has grown 79 percent faster than its housing supply. When vacancy rates are low, landlords can raise the rent without losing tenants.
(Data: Census Bureau.)

That’s left the metro area with one of the nation’s lowest rental vacancy rates and made soaring real estate prices and rents the single hottest issue in the current mayoral election.

Oregon’s House of Representatives approved a Senate bill Thursday that removed the “preemption” in state law that has banned cities from using inclusionary zoning. Gov. Kate Brown is expected to sign.

Saltzman’s chief of staff, Brendan Finn, said in an email Thursday that his boss has laid out a plan for “a community-wide data driven discussion that would include but would not be limited to members of the development community, as well as affordable housing experts and advocates.”

“Dan introduced a resolution at council Feb. 10,” Finn said. “Now that preemption is to be lifted and signed into law, we can get started on a process for crafting a policy for Portland.”

“Mayor Hales has instructed all involved city bureaus to develop plans for an effective Portland implementation of the new law,” Hottman said in an email. “Commissioner Saltzman, in charge of the Housing Bureau, has been instrumental in passing the bill, and will be overseeing the implementation.”

A repeal of the state’s ban was the Portland city government’s top legislative priority in Salem this year. 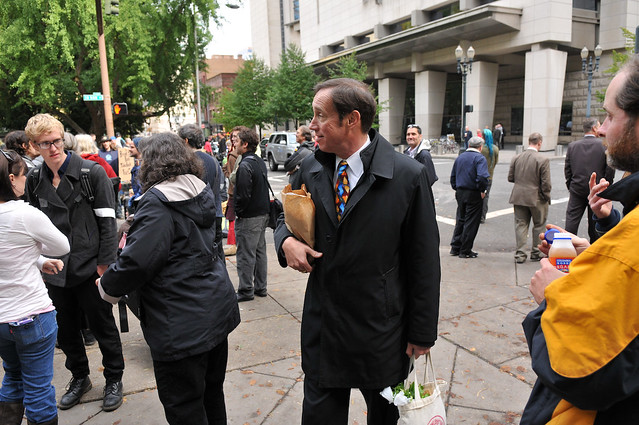 The Portland advocates who’ve been pushing for repeal of the state ban said they’ll be shifting their work to City Hall, in part because they think a successful policy in Portland will create political support for a future effort to fully remove Salem’s regulation of housing price controls. Here’s the word from Vivian Satterfield, deputy director of OPAL Environmental Justice Oregon:

This is obviously a big day for OPAL Environmental Justice Oregon and the Oregon Inclusionary Zoning Coalition. We’re proud to have put this issue on the table in Salem and to have convened a large and powerful statewide coalition that together, brought about this historic victory for housing opportunity. That being said, there are key pieces of the legislation that need to be fixed in future years at the state level. OPAL and other partners of the Coalition, namely those organizations representing people of color and working families, expect to be at the relevant policy tables to craft a local IZ policy that maximizes the use of the tool in its current form. We have already initiated these discussions with Commissioner Saltzman’s office and we look forward to working with the future Mayor of Portland as well. Demonstrated efficacy of any inclusionary zoning policy both at the City of Portland and other jurisdictions ready to adopt their own IZ policy will undoubtedly support future efforts to seek a full repeal and local control.

For three years now, we’ve been exploring how you can’t have a truly bike-friendly city without affordable proximity. Depending on how this new state law gets enacted and what other changes come along with it, this could be a very important moment in making sure Portland’s bikeable neighborhoods don’t slip permanently out of reach for most Portlanders.

The post As state law passes, the fight for affordable proximity moves to City Hall appeared first on BikePortland.org.