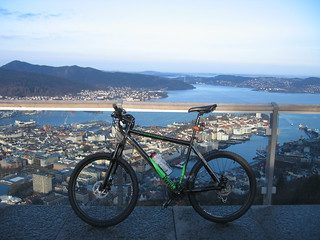 This week’s Monday Roundup is sponsored by the Cycle & Sip ride. Hosted by Eola Hills Winery on March 13th, this event combines a beautiful ride with excellent wine and food.

Uber subsidy: Altamonte Springs, Florida, will underwrite 25 percent of every Uber ride in an effort to boost transit ridership.

New group: “Black Girls Do Bike seems to be one of the fastest-growing bicycle organizations around,” writes Momentum in an interview with its founder.

Bike parking: Responding to its ongoing boom in biking, Vancouver BC tripled its rate of bike parking installation in 2015, adding 289 public racks in 12 months.

MPG ratings stall: A year of lower gas prices has stopped the country’s progress toward fuel efficiency in its tracks.

Artificial savings: By failing to include the cost of transportation to housing, federal housing subsidies are pushing many poor people into the boonies.

Parking and poverty: “We are poisoning our cities with too much parking,” writes Don Shoup in an explanation of how “free” parking hurts poor people.

Car-free cities: “The car century was a seductive mistake,” adds J.H. Crawford in an argument for car-free cities, part of the same WaPo series.

Social engineering: If you want people to change their travel habits, giving people the same tax benefits for transit tickets and parking helps, but what really gets their attention is giving the tax benefit only to transit.

Dehumanized drivers: After a Michigan man allegedly went on a murder spree in between his evening’s Uber fares, National Geographic says “as Uber and Lyft and other services race to enroll drivers in an employment model imitating that of long-haul trucking, it’s worth considering the possible effects, not just on riders, but on the health and well-being of drivers.”

Self-driving cars: Most Americans already want their next car to include some autonomous features.

Google crash: It took more than 1 million miles, but a self-driving car has caused a collision for the first time: a 2 mph impact with a bus.

Carbon tax: Washington might vote on the nation’s first statewide tax on greenhouse gases, despite opposition from legislators in both parties.

Clean-air lawsuit: The UK government faces sanctions from its own Supreme Court unless it reduces deadly nitrogen dioxide emissions from diesel vehicles.

Bike benefits: As Silicon Valley startups pare back exectuve signing bonuses, one that’s been on the chopping block is the free $10,000 bicycle.

Better measure: San Francisco now officially measures the environmental impact of a project not by how much it slows auto traffic but by how much new traffic it creates.

We rely on your support! Please become a subscriber today.