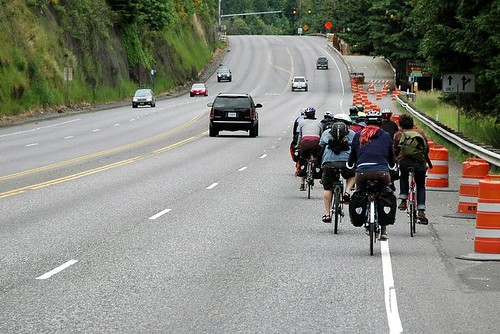 The Oregon Department of Transportation is about to finalize plans for a paving project on Highway 30 north of St. Johns. The project is a golden opportunity to improve this key bikeway corridor that connects Portland to the West Hills, Linnton, Sauvie Island, Scappoose, and beyond.

Highway 30 is a crucial connection from Portland to points north because it’s the only paved street between the steep West Hills and the Willamette River. Unfortunately the riding conditions are bad and often downright dangerous. The road is known as “Dirty 30” in cycling circles because of its poorly maintained bike lanes and shoulders that are often filled with debris. Flats on the road are common. Making matters worse is there’s not enough separation between the bikeway and fast-moving car and truck traffic.

This summer ODOT plans to repave seven miles of this road from (just south of) the St. Johns Bridge to (just south of) Cornelius Pass Road. From mile marker 6.5 (south of the bridge) they’ll repave the entire road from curb-to-curb. Then from mile marker 9.6 (Creston Road) to mile 13.0 (McNamee Road) they’ll repave just the roadway and not the shoulder. Below is detailed map of the project: Last April I sat down with ODOT Region 1 spokesman Don Hamilton and bicycle/pedestrian coordinator Basil Christopher to learn more about the project and make sure they understood how important Highway 30 is to bicycle riders. I laid out a host of suggestions and ideas on how they could use this project as a catalyst for improving cycling conditions. Almost a year after that meeting, ODOT says the project will do several things to make life better for bicycle riders. 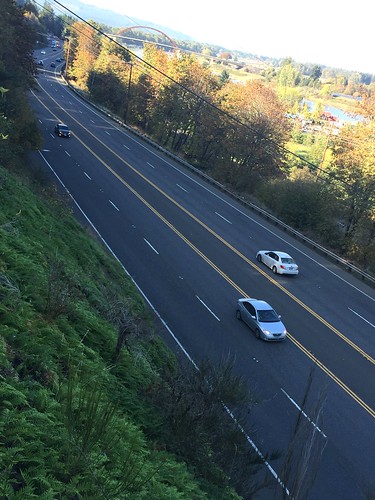 There’s plenty of room to make protected bikeways on Highway 30.
ODOT just isn’t there yet.

I asked about more signage and markings to communicate to road users that this is a bikeway to Sauvie Island. ODOT hasn’t committed to anything like that but their outreach coordinator Susan Hanson said, “If there are locations where you’d like some wayfinding signage we’re happy to take a look at that.”

In August 2013 we reported on a poorly executed repaving project that ODOT did on the Oregon Coast Route. That project left an unsafe ridge between the new pavement on the main roadway and the unpaved shoulder. ODOT’s Hamilton said the agency has learned their lesson from that debacle and they have put special guidance in the plans to make sure crews create a “feathered edge” where the new pavement ends. “We will make sure there’s not a gap or a lip where the shoulder and the paving meet,” Hamilton said. “We’ve established new policies on how we handle that.”

In Linnton, the only neighborhood along the project route, the crosswalks will be refreshed with a “durable brick pattern material.” New ADA ramps will also be added wherever necessary.

Another big concern about this project is how ODOT will manage traffic in construction zones. “The lane reductions will be staged in one direction at a time to avoid impacts to commuters traveling during peak hours,” ODOT says. “Travel disruption will be minimized as much as possible for motorists, cyclists and pedestrians.” Specifically about bicycle traffic, ODOT also says that there will be signs “warning motorists to watch for cyclists”. If ODOT manages the work zones safely, it could result in better conditions for cycling since they plan to have a temporary speed limit reduction.

We hope someday ODOT and the Portland Bureau of Transportation (they share jurisdiction over parts of the highway) will create a safe bikeway between downtown and Sauvie Island. There’s plenty of room to offer a protected lane while still allowing people to drive and haul freight safely and efficiently. This project should improve conditions; but it won’t allow the road to reach it’s full potential.

ODOT is at the final design stages of this project, so if you want to comment on it, please email Susan Hanson at susan.c.hanson@odot.state.or.us and tell her your thoughts.

Once ODOT hires a contractor they’ll host an open house in Linnton this spring. The new pavement and striping should be done by early fall.

The post ODOT is repaving a key stretch of “Dirty 30”: Here’s what to expect appeared first on BikePortland.org.