Carl Wallace’s love of Sanders and cycling are coming together.

Portlander Carl Wallace is crazy for two things these days: cycling and Bernie Sanders. The 43-year old who goes by Kamikaze Karl is so amped up for Sanders’ presidential campaign that he’s organizing a 100-mile bike ride to promote the senator from Vermont who surprised everyone with a big win in Michigan last night.

Wallace’s “Bern for Bernie” century is set for May 14th and he’s already gotten over a dozen RSVPs via Facebook.

Wallace, a handyman and military veteran whose career included a stint with the 82nd Airborne division, was born and raised in southern Oregon and has been a “very enthusiastic cyclist” since he was eight years old. He’s ridden pretty much every kind of bike there is (he built his first freak bike, a chopper, in 1981 and is currently a member of the Dropout Bike Club) and his current passion is ultra-endurance road riding. This summer he’s doing the Trans Am Bike Race, a 4,233 mile ride that goes from Astoria to Yorktown, Virginia. 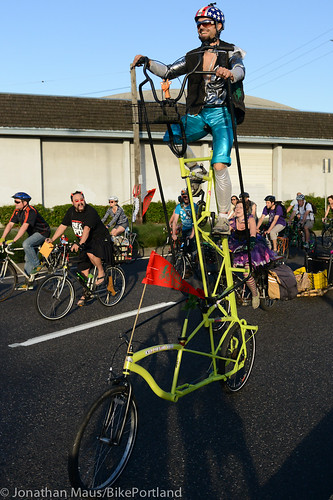 Wallace plans to meld his love of cycling with his belief in Sanders’ “political revolution” by using the Trans Am race to raise money and awareness for the Sanders campaign. He’s been a volunteer for months now and is drawn to Sanders’ message of fighting inequality and corporate greed.

“So just like Bernie I will be traveling across this country talking to people about the issues that speak to them and sharing a message of compassion and activism,” Wallace explains on his GoFundMe crowdfunding campaign where he hopes to raise $2,000 for his “Bern across the country” (20 percent of which he’ll donate to the Sanders campaign).

Why does he think Sanders will be better for cycling than Clinton? Wallace says he’s been pushing for massive investment in infrastructure for a long time. “That means better roads for riding and more and better public transit.” But beyond policy, Wallace thinks Sanders simply has the heart that can heal America.

“I feel all the compassionate people I meet on the road are the types of people that would support Bernie,” Wallace shared with us today. “Having compassion in our leadership promotes love and honesty as a nation… There is no question, Bernie is for the people. Better riding, better everything.”

Check out the “Bern for Bernie” event here.