County bridge engineers and planners floated this proposal to a citizen committee last month and a final decision has yet to be made.

The final design of the bike lanes on the new Sellwood Bridge might not be what you expected. And that’s good or bad news depending on your perspective.

It turns out the bike lanes could be a different color and size than initially planned.

When the curtains came up for the big opening celebration two weeks ago many of you noticed something missing from the main deck of the bridge surface: green pavement to demarcate the bike lane from the adjacent standard lanes. The green colored bike lanes were part of the “final” plans adopted by Multnomah County in July of 2012. They were also still in the plans when we checked in on the project in October of last year. The idea behind the green paint was to keep people from driving in the bike lane. “Our main goal is to indicate to drivers that the shoulder is a bike lane and that bicyclists have a right to be there,” Multnomah County spokesman Mike Pullen told us in 2012. The green pavement treatment is estimated to cost $81,000, a line item in the budget that was once on the chopping block only to be reinstated after concerns from bike advocates and former Mayor Sam Adams.

As the project nears completion the green paint might not make it into the plans after all — but there’s also a chance that the bike lane could get a buffer zone. 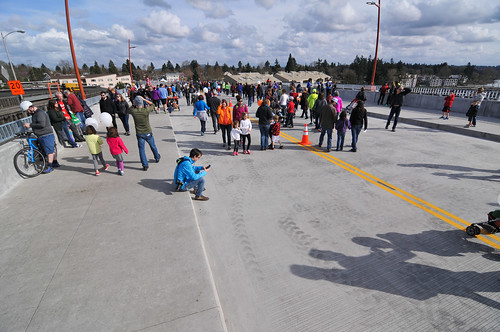 The final striping of the new bridge won’t be done until fall.
(Photo: J. Maus/BikePortland)

At the February meeting of the Multnomah County Bicycle and Pedestrian Citizen Advisory Committee, county staff proposed changes to the bridge cross section. According to draft minutes from the meeting, the county’s impetus for the changes was to “slow vehicle traffic.”

To encourage people to drive slowly, the county is considering narrowing the two standard vehicle lanes from 12-feet to 11-feet (they’d be 10-feet wide in the middle of the span and get larger toward the ends). They would also narrow the bike lane to 5.5 feet (down from 6.5 feet) and then add a 2-foot painted buffer zone between the bikeway and the other lanes.

As for the green paint, bridge construction crews haven’t found the right mix of materials and application method that meets their standards. The thermoplastic used in bike boxes isn’t feasible for this much space and the county has not been pleased with tests of a concrete stain. The stain they’ve tried wasn’t durable enough and it produced a darker shade of green than what the City of Portland uses.

The City of Portland has been successful with green color on large sections of SW Stark and Oak in downtown Portland. The difference with that application is that it’s on asphalt whereas the bridge is a concrete surface. The County is currently discussing the issue with the City.

Given the added cost and the results of testing so far, the members of the bike advisory committee told the County they “generally felt okay” not using the green on the entire bridge span. The green color will likely be used to indicate potential conflict areas at intersections on each end of the bridge — but the county said they’ll wait until all the intersections are built before deciding where to put it.

The final striping and coloring plan is still in development. The County’s bicyle and pedestrian advisory committee meets tonight to talk more about it. You can swing by and join the conversation at the Multnomah Building (501 SE Hawthorne Blvd) from 6:30 – 8:30pm.