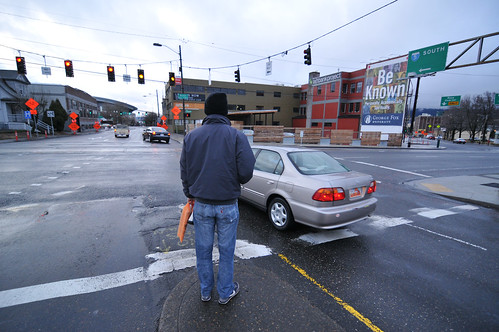 On Monday the Oregon Department of Transportation will begin construction on the most substantive changes to cycling conditions we’ve seen on N/NE Broadway in many years. And it’s sorely needed.

From it’s bike-oriented neighborhoods in northeast to Portland State University downtown, Broadway is a very valuable connector in our bicycle network. But unfortunately it’s littered with myriad dangerous conditions for almost its entire length. One of those is an Interstate 5 off-ramp just east of Flint. The ramp comes into Broadway at an oblique angle. It’s a safety concern because the sightlines are poor, many people don’t bring their cars to a complete stop and cycling speeds are relatively high at this location due to a slight downhill.

This project will completely re-align that existing “slip lane” so that it connects to Broadway at a safer location and at more of a right angle. But that’s not the only thing that ODOT will change. The project also comes with a new crossing signal near the streetcar platform between Wheeler and Ross. This will help with foot traffic to the Moda Center and employees at the Leftbank building; as will a new curb extension that will be installed on the southeast corner of Broadway and Wheeler.

Another element of this project that will improve cycling conditions is the removal of the double-signal at Vancouver and Broadway. Currently where Vancouver and an I-5 off-ramp meet Broadway there’s a separate signal for each. With freeway users directed to the newly re-aligned ramp, ODOT will replace the double-signal with a standard signal. This means bicycle riders will no longer be tempted to make the dangerous move of skirting in front of freeway traffic from Vancouver in order to get the green to continue south toward the Rose Quarter.

This project began as merely one small element of the larger N/NE Quadrant planning process and it would not have happened without strong citizen activism.

Work starts Monday and it expected to be complete by this fall. You can learn more and get updates via Oregon.gov.