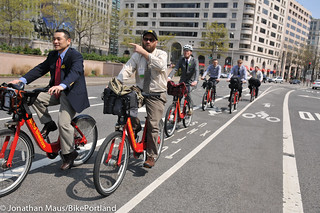 Exclusionary zoning: A New Jersey suburb is blocking construction of a mosque by requiring its parking lot to be twice as big as a comparable church’s.

Youth perspective: Matlock Grossman, the 11-year-old Angelino whose testimony on behalf of a road diet went viral last fall, has written a persuasive op-ed about transportation for the L.A. Times.

Wanted “criminal”: A Pennsylvania man has been jailed and banned from his bike for 10 cases of “obstructing traffic” by riding in the middle of a lane.

Sharrow history: The Bicycle Story traces the embattled marking back to its inventor in audio interviews.

Mayoral regrets: Looking back at eight years leading London, Boris Johnson said he wishes he’d done more to make it easier to park a car. Wait, no he didn’t.

Tango by Bike: A local tradition gets its hour in the New York Times.

Data vs. profiling: Marco Conner argues in Streetsblog that “enforcement as it relates to race” is “the most pressing challenge” to Vision Zero in the United States. Among other fixes, he calls for data-driven targeting of “the most dangerous driver behaviors in the locations where they are causing the most harm.”

Poverty penalties: One Texas town hands out more traffic violations to blacks and Latino people … but the difference was explained by poverty-related charges like failure to carry insurance or an up-to-date ID.

Driverless cars: If they could mostly eliminate illegal driving, cities might be able to eliminate half their police force.

Food deliveries: Delivery people may bike for a living but that does not mean they are not people with legitimate interests, notes Brooklyn Spoke.