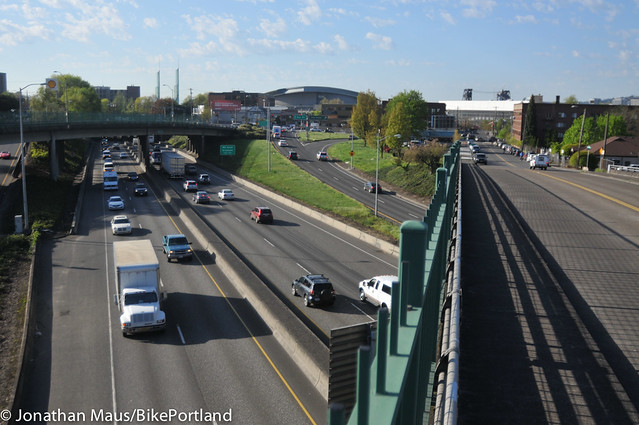 Where did all our money go?
(Photo: J.Maus/BikePortland

A revealing bit of information came across our desks this week.

The Oregon Department of Transportation just unexpectedly received $196 million from the federal government and has decided how to spend it after almost zero public input.

Before we look briefly at it, consider a few bits of high drama from the world of local transportation funding:

• Yesterday, we reported on a potential bike lane project that could radically improve the main bike route in and out of Southwest Portland but was, at an estimated $4 million, seen by some as hopelessly expensive.

• This morning, the For Every Kid Coalition is mounting an uphill battle for $15 million from regional government Metro to replicate Portland’s wildly popular program improving biking and walking near schools.

• Next week, TriMet and Metro will announce an 11th-hour overhaul of their Powell-Division express bus project, which is scrambling to find $100 million that would bring in a federal matching grant for transit, biking and walking improvements across much of Southeast Portland and Gresham. Finding that much money in less than two years is seen as a major challenge.

• In two months, Portlanders will vote on whether to hike their gas tax, the latest in a 10-year series of increasingly desperate ideas for staving off an ever-deepening road maintenance shortfall. The gas tax would raise $16 million a year.

Meanwhile, the Oregon Department of Transportation just unexpectedly received $196 million from the federal government and has rapidly decided how to spend it with almost zero public input. The formal vote by ODOT’s governing board (the Oregon Transportation Commission) is scheduled for today.

This big, unexpected chunk of change has been known to insiders for a few months, but there has been minimal public discussion about how to spend it. The Bicycle Transportation Alliance pointed out a different way to allocate the money in a letter (PDF) to ODOT in January. BTA Advocacy Director Gerik Kransky said the $196 million should be spent on projects listed in the state’s bicycle and pedestrian plan, for preliminary engineering on ODOT facilities to make projects more shovel-ready, and on projects that will reduce greenhouse gas emissions.

“It is increasingly rare to see unanticipated dollars in these programs,” Kransky wrote, “and we hope you’ll agree to fund [these] impactful projects.”

Under ODOT’s current proposal, would this windfall go toward terrible projects? Generally, no. The spending list ($77 million for “fix-it” maintenance and improvement projects, $49 million for freight connections, $35 million for seismic retrofits, $25 million for “strategic investments,” $5 million for disability-friendly curb ramps and $5 million for new “non-highway” connections) could probably include many worse ideas if ODOT wanted it to.

But when everyone from state Sen. Betsy Johnson to former Metro President David Bragdon to every leading Portland mayoral candidate says that ODOT is flush with cash when cities are scraping by, this is what they’re talking about.

When Metro Councilor Sam Chase marvels that the region is on track to spend $9.8 billion finishing its auto transportation system by 2057 (black line in the graph below) but won’t be able to find $2.1 billion to finish its biking and walking system until 2209, this is what he’s talking about. When The Oregonian asks whether Portland can possibly find $613 million over 30 years to build the bike plan that would turn it into an American Copenhagen, this is what it is (or isn’t) talking about.

When we wonder how it’s possible that 83 percent of U.S. trips still happen in cars at a time when federal taxpayers are spending $52 million to move 85 people off a Louisiana island that’s about to slip beneath the Gulf of Mexico, this is what we’re wondering about.

The post As cities scramble for cash, $196 million drops into state’s lap from nowhere appeared first on BikePortland.org.