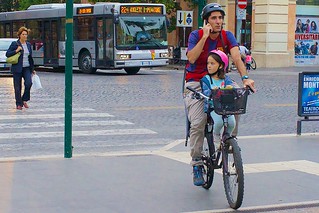 “Road homicide”: It’ll be a new offense in Italy, associated with minimum prison sentences of two to eight years and 15-year bans from driving.

“Bike Batman”: A Seattle engineer who confronts bike thieves and returns bikes to owners describes his work as “kind of fun.”

Skinny biking: A study of 150,000 adults found that bike commuting makes you weigh about 10 pounds less than car commuting would.

Criminalized texting: “Using your cellphone while crossing a street could become illegal in New Jersey.”

Fixing Atlanta: The capital of the Southeast may be putting some of its racial divisions aside as it adds bike lanes, streetcars and crosswalks to its central city.

Transit tweeting: The guy who runs the Twitter account for Bay Area Rapid Transit dropped some late-night real talk about infrastructure during a shutdown, and people liked it.

Autonomous cars: Google has written Three Laws of Robotics for them, supposedly naming walking and biking safety as top priority.

“Stopping gentrification”: One Detroiter leads multicultural bike rides that help her neighbors learn the area’s history from one another.

Safety targets: The federal government has for the first time called for all states and regions to set targets for biking and walking safety.

Why people bike: Living in a denser neighborhood makes you more likely to bike or walk if you’re poor, but not if you’re rich, a study found.

Risky tradeoffs: What can buses do to travel faster? Be more dangerous, one man argues.

Portland, boomtown: A Bloomberg columnist visited Portland and left in awe of our relative economic prosperity.