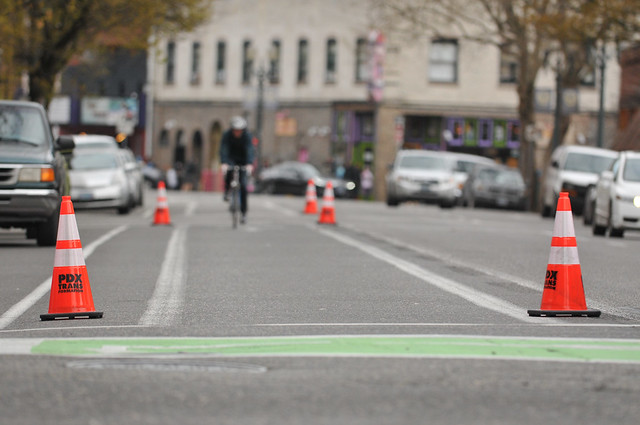 The upstart and anonymous group of tactical urbanists that’s taking street safety into their own hands has deployed 14 large orange traffic cones on Southwest 3rd Avenue between Burnside and Stark. The cones have been placed inside the buffer zones of the bike lanes that were just striped back in October. It’s the largest single deployment of cones since the group began four months ago.

The new installation marks a new level of momentum for PDX Transformation. Over the weekend a series of “20s is Plenty” fake speed limit signs they posted in southeast Portland earned them coverage from KATU-TV and the Willamette Week.

What does this movement symbolize? I’ll get to that later. First let’s take a look at SW 3rd.

Based on my observations this morning, the cones are working very well. People are driving cautiously and they are making much safer right turns in the presence of the silent-but-mighty cones. 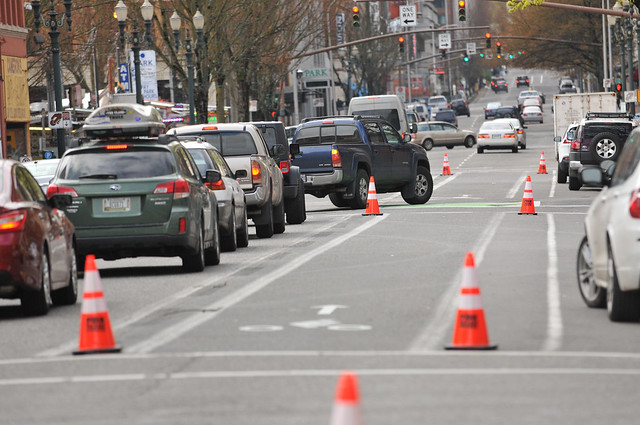 Look at this beautiful and safe, slow, 90-degree turn across the bikeway at SW Oak.

And here’s a short video of another view: 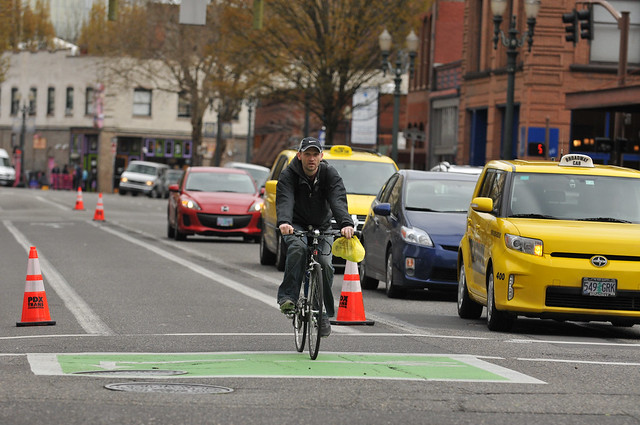 This cabbie patiently waited and the made a slow and predictable turn across the bikeway at Pine. 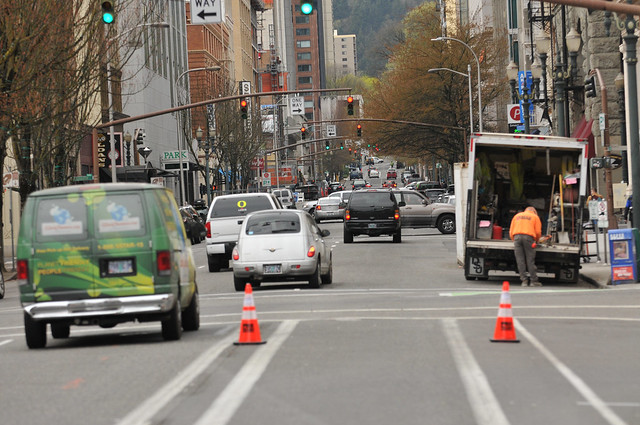 The cones stop where the bike lane stops at Stark. Even though only a left-turn is permitted here, the cones prevent people from driving in the bike lane prior to the intersection — a common behavior from people who want a jump on the upcoming block. 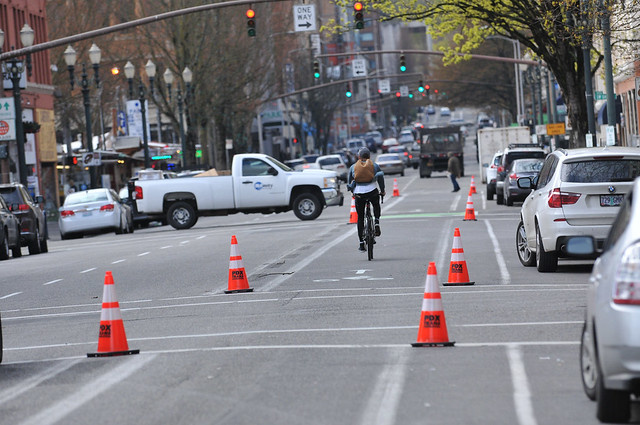 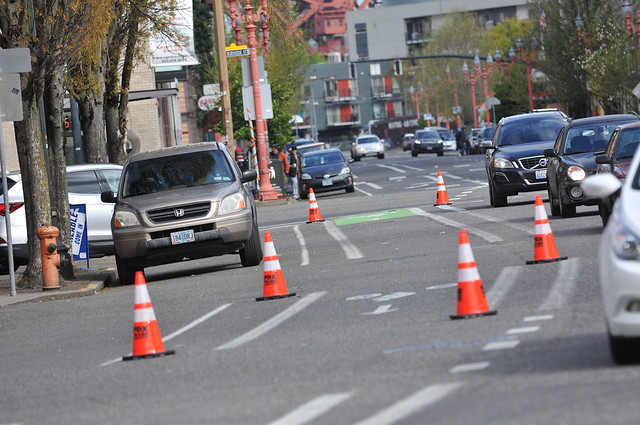 What’s going on here? Why are people taking things into their own hands and what does the orange cone revolution tell us about the state of transportation advocacy in Portland? Here are three things that came to my mind as I stood out on 3rd Ave this morning…

People are frustrated with the status quo

This sort of guerrilla activism is about frustration. PDX Transformation is part of the same local transportation ecosystem that sprouted Bike Loud PDX. In both cases, people were sufficiently fed-up with the pace of change and the status quo when it comes to transportation reform. The success of both groups shows that our elected officials, planners, bureaucrats, and more established advocacy groups are not meeting the needs of a large number of constituents. It’s sort of like what’s happening with our national presidential politics. A huge swath of the public is so frustrated at the slow pace of change and lack of bold actions that they are eager to support outsiders who are willing to take immediate action.

Our streets can be transformed with very little infrastructure investment

The total cost of the 14 traffic cones out on SW 3rd was about $300. When it comes to designing streets that will encourage safe and sane behaviors by all users, we do not need to spend millions of dollars. When bureaucrats cite a lack of money to make safety changes, they are often simply exposing their own lack of willingness to be creative and have a more “can-do” attitude. This was made clear last week from former New York City DOT chief Janette Sadik-Khan. She and her crew accomplished the most amazing urban street transformation ever — the creation of a huge public plaza in Times Square — by using nothing more than large orange traffic barrels and a few dozen cheap plastic beach chairs.

Many of our bikeways are woefully under-designed

The cones on SW 3rd are particularly interesting because this is a new bikeway that was created by PBOT just five months ago. But even with everything they know about good bikeway design, the lack of physical separation and/or aggressive markings and signage to keep people from driving in them make the bikeway feel inadequate to many users. These cones work because — far too often — the design of our bikeways doesn’t. 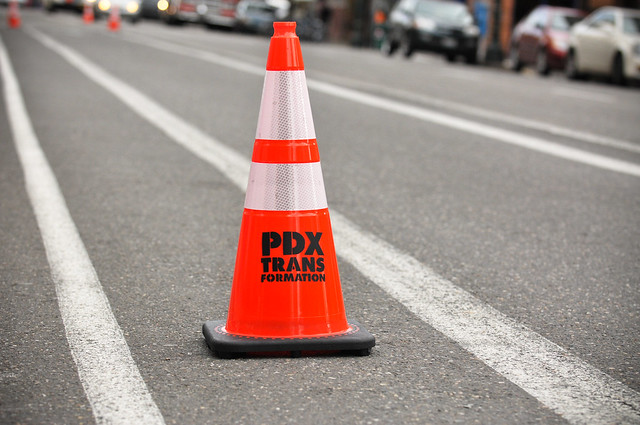 With PDX Transformation and their projects garnering more and more attention, it’ll be interesting to see how or if the City of Portland changes their tune — both about the cones and signs in general and the locations they highlight more specificallky. So far PBOT has taken a neutral stance. They’ve said the actions are illegal and they don’t condone them; but they also agree in the overall messages the cones are trying to convey.

You can keep up with the latest installations by following PBOTrans on Twitter.

The post What are all these unauthorized orange traffic cones telling us? appeared first on BikePortland.org.