“The trains will be so crowded that cyclists will be waiting to get into a train.”
— TriMet spokeswoman Roberta Altstadt on MAX overcrowding during the project

Here’s the good news: the badly worn pavement on NW 1st Avenue, an important but unpleasant biking connection to the Steel Bridge and Waterfront Park, is about to be fixed.

Here’s the bad news: the repair project will snarl TriMet’s entire light rail system for two weeks next month, cutting the frequency of every MAX line and leading to extremely crowded trains that will probably be unable to fit bikes.

That’s why TriMet is urging people to avoid taking bikes on MAX during the repair work, May 8-21.

Instead, the agency suggest that people leave their bikes at MAX stations or at home, shift their commute hours or else simply avoid the MAX.

“This is our oldest section of the MAX,” TriMet spokeswoman Roberta Altstadt said Monday. “You reach a time in any light rail system that you need to do this work, and our time is now.”

After the work is done, the pavement should resemble 11th Avenue in the Lloyd District, where TriMet did similar track work in 2014 and which is now much more pleasant to bike across.

Because the Red and Blue MAX lines run on 1st Avenue, the track work will force many trains to turn around in odd locations, a time-consuming process that will force the transit agency to reduce frequencies throughout the MAX system. The Orange Line, for example, will remain on its usual route but will run every 20 minutes during rush hours instead of every 12 — a 40 percent reduction in total seating capacity. 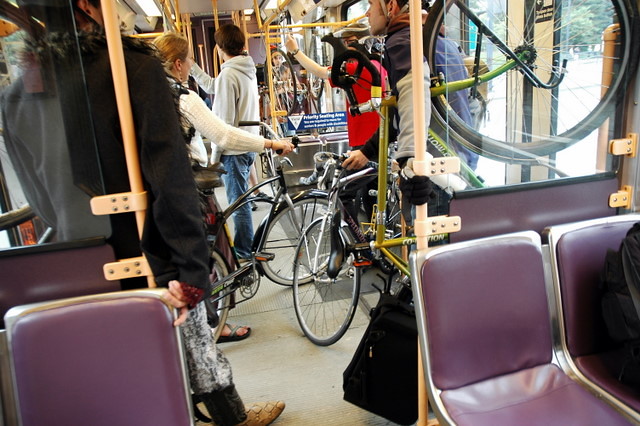 Don’t count on it.

The Red Line, meanwhile, will not serve the west side of the metro area at all; instead, Blue Line trains will run every 10 minutes during rush hour, and every 15 minutes other hours, between downtown Hillsboro and Galleria on the west end of downtown Portland.

Red, Yellow and Orange trains will share the transit mall. The Green Line will run between Rose Quarter and Clackamas Town Center only. A fleet of temporary shuttle-bus lines will serve SW 2nd and 3rd Avenues, getting people closer to the closed MAX stops on 1st. Here’s an animation explaining the various changes:

You can also see a summary of the changes here and learn more about the repair project here.

Altstadt said Monday that she believes most of the crossings of 1st Avenue will remain open to people biking and walking during most of the project.

“Currently it looks like the only streets that will be affected that cross 1st Avenue are Couch and Ankeny,” she said.

All of these transit changes will make biking relatively more efficient, which in some ways fits well with the Bicycle Transportation Alliance’s Bike More Challenge, which this year is being held in May for the first time. Unfortunately, it also means that new bikers will have a harder time leaning on overcrowded MAX cars for parts of their journey.

“Several voices were considering is it going to be so packed that we should really ban bikes,” Jeff Owen, TriMet’s active transportation coordinator, said Monday. But the agency decided against that.

“It’s really going to be congested,” Owen concluded. The bottom line is that bike-and-MAX travel should become a “last option” for riders.

“We hate to say ‘consider other transportation options,’ but this is just a necessary project,” Altstadt said. “We just need to get through this two-week period.”