Raisman is one of 16 people from around the country who were toasted at a gala event last night at the annual Lifesavers Conference that wraps up in Long Beach, California today. Over 2,500 people and 90 exhibitors attended this year’s conference which is in its 34th year and bills itself as, “a forum for the presentation of proven countermeasures and initiatives that address today’s critical highway safety problems.” The event is run by a nonprofit and gets most of its funding from the auto industry and insurance companies.

A traffic safety programs specialist at PBOT, Raisman was recognized for his work on Portland’s neighborhood greenways — the residential streets where cycling and walking are prioritzed over auto use. He was honored with a Public Service Award from the National Highway Traffic Safety Administration. The inscription on the plaque he received reads: “In recognition of working to reshape roadways into safer, more equitable, and comfortable streets for pedestrians and bicyclists through community engagement across Portland and Seattle.” 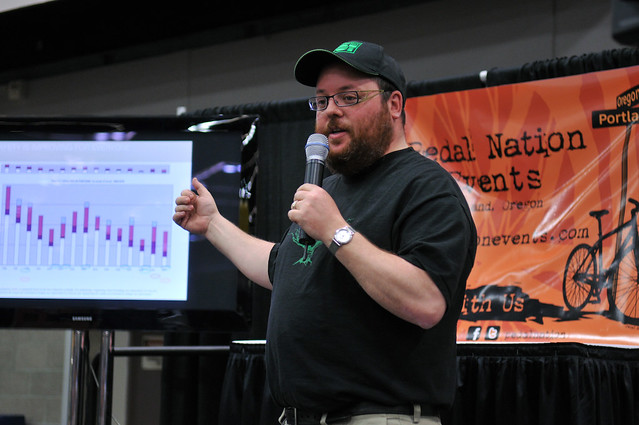 Raisman (probably on his own free time) presenting about bike safety at the Pedal Nation Bike Show in 2011.

Many of you who read BikePortland and/or work in street activism in this region are probably well aware of Raisman. He’s been the subject of numerous articles here on the front page over the past decade including an interview in 2008. He’s been at the front lines of this fight for many years, spurred in part by the death of his roommate who was killed in a crash while cycling a few blocks from his home in 1998.

Raisman is the consummate advocrat — someone who deftly walks the line between passionate advocate and agency employee. His work has led to many things you probably take for granted today: bike parking corrals, intersection paintings, the NE Holman “pocket park,” and much more.

At the city’s 2012 Transportation Safety Summit (what used to be an annual event under former Mayor Sam Adams) Raisman made the case for neighborhood greenways after someone in the audience questioned whether investing in them was a wise use of city funds. Here’s how he responded:

In terms of the money side… We’re averaging about $141,000 a mile. To give you a sense of that, $250,000 buys one traffic signal. Building this network is a great value and when we leverage that on our busy streets that support local business and bring more money and people to those streets, making those major investments on those busy streets like Broadway and all these others are really important and that’s why people will continue to support it.”

On a more somber note, following a spate of tragic crashes in late 2007 Raisman wrote a guest essay for us titled, From sadness to action. In it, he urged the community to turn grief into action: “Speaking from experience, I can tell you that you can do something to make our streets safer. Volunteer. Start your own effort. Support funding efforts that provide the necessary resources. Attend every street project meeting you can. Join the huge network of people who are working hard to make Portland or the streets where you live safe and pleasant. Remember that as we increase safety for the most vulnerable roadway users, we increase safety for everyone. Be the change.”

Thanks for being the change Greg! I hate to think where we’d be today in Portland without your work, support of the grassroots, and personal advocacy all these years!