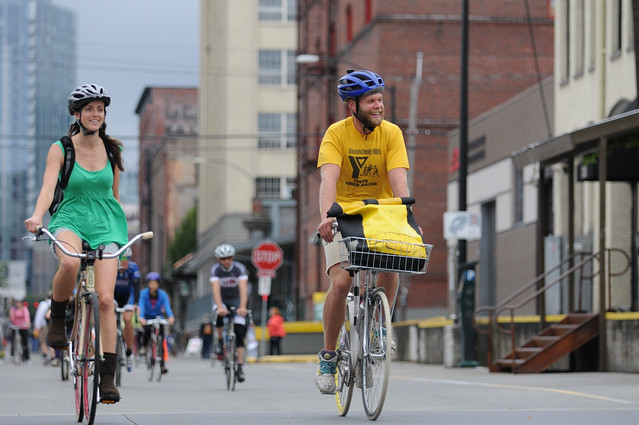 No part of Portland has more untapped biking potential than its smallest quadrant.

Northwest Portland is, in ways we’ll explore this week, already the city that much of Portland dreams of becoming. It’s income- and age-diverse, rich with jobs at every skill level and businesses of every size. Its streets are relatively safe; aside from the outer industrial reaches of U.S. 30, it’s only seen 14 traffic fatalities in 10 years. According to the city’s annual community survey, no quadrant reports less trouble with speeding traffic.

Northwest Portland is a paradise of proximity. But fewer people bike here than in St. Johns, North Tabor or Foster-Powell.

And people are certainly eager to become northwest Portlanders. The quadrant has been growing faster than any other. Iain MacKenzie, a northwest Portlander who publishes the development website NextPortland.com, calculates that the district has added or is preparing to add 5,980 new homes since 2010. He points out that the population of the Census tract along the western side of the Pearl District, beneath and on each side of Interstate 405 as it climbs to the Fremont Bridge, has risen 90 percent since 2009.

But only about 6 percent of the residents of that neighborhood bike to work — the same share as in the entire city of Portland.

The next tract west is 5 percent. The tract to the north, above Thurman Street, is 4 percent. The thousands of residents there have approximately the same probability of getting around by bike as those at NE 89th and Glisan, or SE 52nd and Flavel, or the neighborhoods just north of downtown Vancouver, Wash.

Portland is betting its future on being able to reduce drive-alone cars down to 40 percent of all citywide traffic in the next 15 years. But here in northwest Portland’s paradise of proximity, 40 percent of commutes still happen in cars. Transit and walking are already popular, with about 17 percent of commutes each. It’s biking that is failing to realize its potential.

The clever Google spreadsheet game created in 2014 by Nick Falbo and Elliot Akwai-Scott of Alta Planning + Design, which challenges users to get Portland to its 25 percent biking target, is the best illustration we’ve seen of how unusually low northwest Portland’s biking rate is: Here’s another way to look at it: northwest Portland has approximately the same amount of biking that inner southeast Portland did in 1990.

In other words, this is a problem that Portlanders know how to solve.

All this week we’ll be reporting about the ways Portlanders have been, and will continue to, solve the problem of biking here in northwest. Stay tuned.

The post Why NW Portland matters so much to the future of local biking appeared first on BikePortland.org.