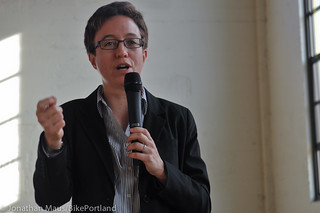 The 2017 Oregon legislature hasn’t even been elected yet, but state House and Senate leaders are getting ready for another try at a transportation bill.

They went into the 2015 session with what seemed to be a similar plan and the backing of a broad coalition of interest groups, even the gasoline and freight industries. But Republicans refused to pass the deal without repeal of a low-carbon fuel standard. A special bipartisan committee met behind closed doors for weeks, trying to come up with an alternative carbon-reduction plan, but their agreement withered almost as soon as it saw the light of day.

It’s not yet clear who’ll be on the 2017 negotiating committee. “A spokeswoman for Kotek said the appointments will be made in a few weeks,” the Statesman Journal reported.

In her annual State of the State speech this month, Gov. Kate Brown called for a bill that would “reduce congestion.” What steps Brown would take to achieve that goal remain to be seen; but a typical response to her framing of the issue is to build more and wider highways. And despite all the evidence and common sense, much of the political class is still stuck in 1970s-era thinking that the next travel lane will be the one that never fills up.

Asked at a recent forum how they’d relieve congestion, nearly all 11 candidates for the Clackamas County Commission said they’d support widening I-205. Several of the candidates even went so far as to specifically oppose investments in public transit and biking. “We know there are no congested bike lanes or sidewalks, just congested highways and freeways,” Clackamas County Commissioner Paul Savas was quoted in the Lake Oswego Review. “That is where we need to invest our dollars right now.” (Savas is also a member of Metro’s Joint Policy Advisory Committee on Transportation — a body with great influence over regional spending priorities.)

Some transportation reformers, such as former Metro President David Bragdon, have begun urging state legislators to deny any additional funding for the Oregon Department of Transportation without changes to its operations that would focus it more on mobility and safety and less on automotive speeds.

Legislative election season is starting to ramp up. Voters will select the 2017 legislature on Nov. 8.