Green Zebra is opening along the beeswax-colored Multnomah protected bikeway and they’re planting pollinators in the planter boxes.

Green Zebra Grocery, the business we’ve said has the best bike parking in Portland, is just two days away from opening their second store. And they’re putting bicycles front-and-center.

At 8:00 am on Thursday a parade of zebra-striped bicycles will roll from the the original Green Zebra on Lombard in the Kenton neighborhood to the new store in the Lloyd District (808 NE Multnomah). They’ll arrive via Portland’s best protected bike lane and park at the edge of the sparkling new public plaza of the Hassalo on Eighth development which is home to a building named “Velomor” and a bike parking facility with 1,200 spaces (the largest in North America).

Green Zebra’s opening is a big milestone in the Lloyd District’s ongoing transformation from suburban-style, 1960s industrial park to a more modern, dense and vibrant urban place. We captured this transformation in a three-part series we published last summer. 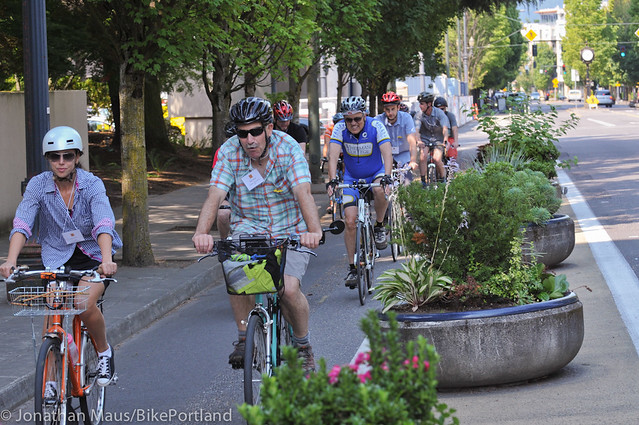 Some of the concrete planters on Multnomah have been cracked and damaged by people with poor driving skills. Green Zebra has formed a partnership with City Repair and a corporate sponsor to fix and replant them.
(Photo: J. Maus/BikePortland)

There are a lot of companies that act bike and community-friendly, but Green Zebra is legit and store Founder and CEO Lisa Sedlar is the real thing. In her former job as CEO of New Seasons Market she was directly engaged with the (sometimes controversial) Williams Avenue project and she positioned their Williams store to optimize the experience of bicycle riding customers.

“The days of driving to the big store and parking in the big lot and doing the big shop are a thing of the past — it’s time consuming and wasteful,” Sedlar said in a press release this week.

Not only is her store adjacent to the Multnomah Street bikeway on the ground floor of a bike-centric residential development, she’s also pulling out all the stops to express Green Zebra’s bikey bona fides: on Thursday they’ll raffle off a new Marin bicycle and they’re sponsoring a bicycle repair station from 3:00 to 6:00 in partnership with Go Lloyd and Left Coast Bicycles.

And the best news of all: Green Zebra and American Assets Trust (owners of the Hassalo and many other buildings) are sponsoring a repair and replanting of the concrete planters that create the bikeway separation on Multnomah. The store is bringing in experts from City Repair who will plant pollinators along the entire corridor. That’s fitting because the color of the bikeway’s buffer zone is officially known as “beeswax.”

Swing by on Thursday to check it out. For more details about the grand opening check out GreenZebraGrocery.com.

Disclaimer: Green Zebra and Hassalo on Eighth are BikePortland advertisers but they had no editorial influence on this post.

The post Green Zebra opens in the Lloyd Thursday, with bikes in a starring role appeared first on BikePortland.org.