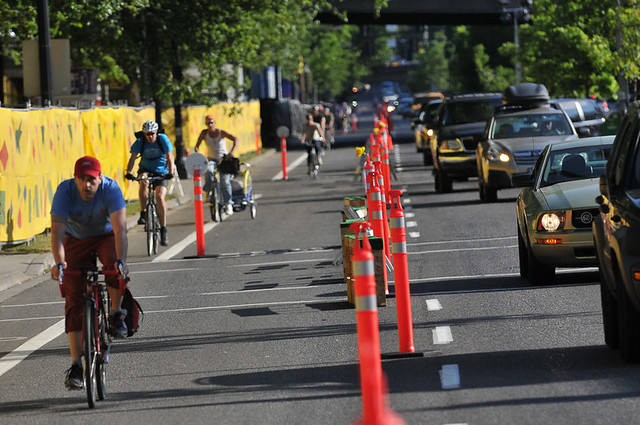 Just when you thought May couldn’t get any better for biking in Portland, the City just announced that their Better Naito project will be returning this summer. The Bureau of Transportation says one northbound lane of Naito Parkway will be converted to a two-way biking and walking facility from May 2nd to July 31st.

Better Naito debuted in June of last year as a partnership between the city and tactical urbanism group Better Block PDX. They worked together to create a safer way to walk and bike on Naito for two weeks during the busy summer festival season on Waterfront Park. After a successful first run, the temporary lane returned for another week in July.

This latest announcement is a significant extension of the project and could lay the groundwork for a permanent change to Naito. The nearly three-month demonstration will reconfigure Naito from SW Main Street to NW Davis. That’s a distance of about 0.7 miles.

Portland Mayor Charlie Hales has said adding a new bikeway to Naito is something he wants to do. Last September when I asked him about making Better Naito permanent he said, “That’s the next thing on our list.”

According to the city, the impetus for the change is the safety of the 15,000 people that attend various festivals in Waterfront Park per day during the peak season. “To reach the festivals,” wrote the city in a statement, “People are too often forced to squeeze into narrow dirt paths, walk in a bike lane, or bike in a travel lane with motorized traffic.”

Even with the driving prohibition on one lane of Naito, data collected during the 2015 Better Naito implementation found that during non-peak hours, motor vehicle travel times were not significantly impacted.

Because of the success of this project last year, PBOT has announced that Community Event Permits will be made available to festival and event organizers who use Waterfront Park. The permits will allow them to, “implement placemaking features along the Better Naito corridor and create a physically separated space for people walking and biking in order to help everyone safely and comfortably access the waterfront.” The events that eligible for these grants include: the Cinco de Mayo Fiesta, the Portland Rose Festival City Fair, Portland Pride Fest, Waterfront Blues Festival, BIKETOWN Bike Share launch event, and the Oregon Brewers Festival.

PBOT also released a new video (above) about last year’s project and a website with more information.

The post City will bring back “Better Naito” for three months starting in May appeared first on BikePortland.org.