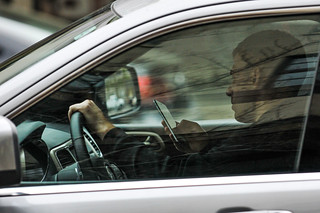 Three weeks after the State of Oregon declared a culture war against distracted driving, they launched the first battle and the results of a “saturation patrol” show just how commonly people break the law while driving.

Keep in mind that the areas patrolled are rural and have low population density and traffic volume. Just imagine how many violations they would uncover if they did an enforcement action like this in Multnomah County.

A recent analysis of crash data by the Oregon Department of Transportation showed that between 2010 and 2014, a distracted driver is involved in a crash every 2.5 hours and a person is injured because of distracted driving every 3 hours. A recent survey by AAA found that over a 30-day period, 70 percent of people admitted to talking on their phone while driving.

Hopefully the State Police will keep up this pressure and continue to do enhanced patrols. If they were able to do these regularly, we might not need a new statewide transportation funding package.

The post Oregon State Police hand out 317 tickets and 273 warnings in 48 hours appeared first on BikePortland.org.