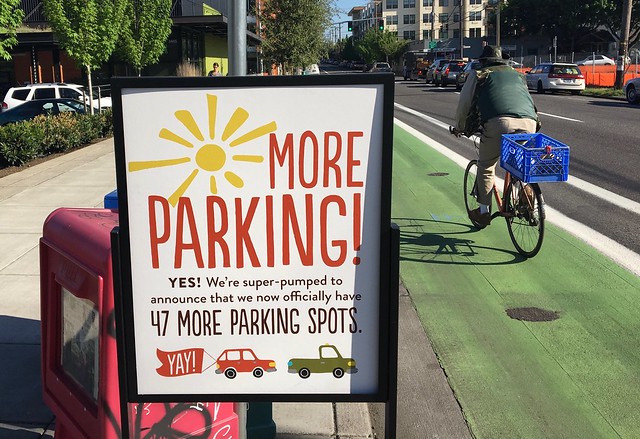 The costs of “free” parking have been hidden inside the price of almost everything we buy, but it’s rare to see an example as straightforward as this one.

The New Seasons Market on Williams Avenue, which like virtually every grocery store in the city doesn’t charge you to park a car on their property, recently started renting 47 parking spaces from an apartment building across Ivy Street that charges $175 a month for resident parking.

New Seasons won’t disclose what it’s paying to rent the new spaces — “we keep our real estate transactions confidential,” spokeswoman Mea Irving said Wednesday — but if they were paying the same $175 per month as residents, those 47 spaces would cost $98,700 a year. 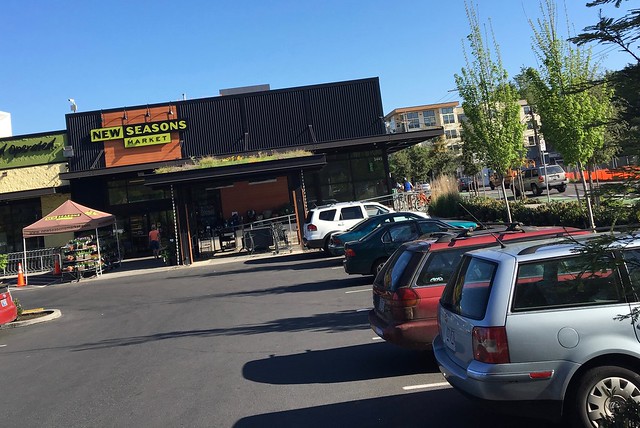 New Seasons occupies a one-story building on NE Fremont between Williams and Vancouver. 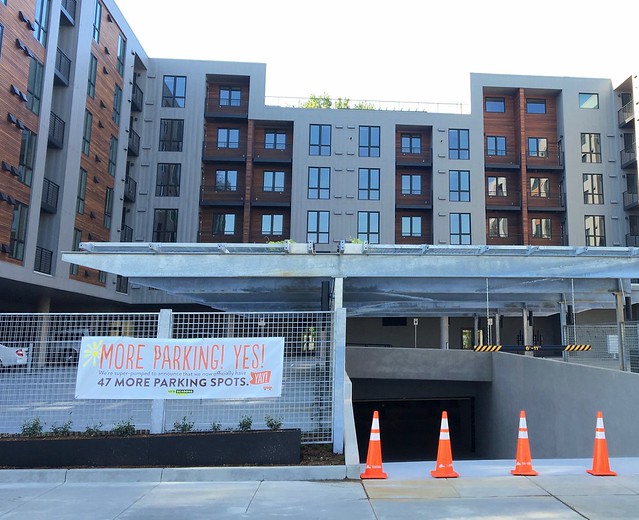 Across from the entrace of New Seasons are the new Cook Street Apartments — and a banner announcing the new parking spaces.

That’s an impressive amount of bike parking for a grocery store anywhere, and Portland-based New Seasons is better than most U.S. grocers in avoiding excess amounts of auto parking. Also, it’s likely that if New Seasons hadn’t shelled out for the overflow parking space, it would have faced a political pressure from its neighbors. People would simply park cars on nearby streets, as many do for Zupan’s Market on Southeast Belmont (about 30 on-site auto parking spaces, shared with the apartments upstairs) or Trader Joe’s on Northwest Glisan (about 40 on-site auto parking spaces).

The only way New Seasons could avoid building its parking costs into the price of its groceries would be to charge people for parking — that’d discourage more people from driving there unless they really needed to. But paid parking isn’t really an option for New Seasons, because the City of Portland offers free parking on all the surrounding streets; even more people would spill into the surrounding area.

Zupan’s and Trader Joe’s are proof that the grocery business doesn’t collapse if customers have to walk a little ways to a car trunk. But when it comes to charging for car parking, grocery stores’ hands have been tied by a city that refuses to charge for use of public space along its curbs. Every other outcome — including a few unnecessary cents on every grocery bill — flows from there.