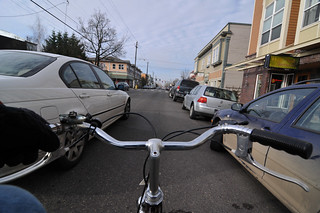 There’s a reason bicycle operators are legally defined in Oregon as “vulnerable roadway users.” We use the streets without all the steel and glass that protects others. And that’s why we take harassment and road rage so seriously. Even when people think they’re just pulling what they think is a harmless stunt like revving an engine or “rolling coal,” they often have no idea just how much their actions hurt and scare us.

BikePortland reader Reed Andrews says he was the victim of a “prank” last night that left him trembling with fear and the aggressors laughing in delight.

I got doored by a car intentionally. Just a teenage prank most likely.

Around 1:20 am Thursday I was heading home from work. I checked to see if anyone was behind me as I turned from NE 21st to Tillamook.

A block or two down I sensed this car was super close to me and I wanted it to go away. Someone then got in the back and opened the passenger side door on me. It knocked me off my bike, not particularly violently. And then I yelled at them as they sped away.

I called 911, and as I did they turned around after experiencing the diverter on 16th. I feared for my life in that moment, thinking they were coming back for me. The car then went up 19th, its hissing go-cart like engine haunting me as it drove off. Police came and took down my info. All they said they could do was arrest him for harassment. The car was a beat up and old teal Honda Civic/Accord sedan, I know the difference but the car was so old I am not familiar with the differences in those models. They were from Washington, standard license plate, I think it was AHJK141 but I’m really only certain about the A & the 141 in that sequence.

I’ve never felt so vulnerable, and I guess I’m lucky in that I’ve never been the victim of a heinous crime, just a prank where someone took their car and tried to scare me with it. I wasn’t hurt and other than my chain going off after it hit the street my bike is fine.

I got hit by a car last spring when it turned in to a gas station and didn’t see me. This feels worse if only because whoever those teens are think they can get away with it. The woman who hit me felt bad, she apologized, those teens probably thought it was hilarious that the lame biker yelled and cursed as they drove off. And that sickens me. Hopefully these people are caught, hopefully it never happens again. And if any good can come from this it’s that drivers need to better realize people on bikes are on there, and are vulnerable to any movement their massive car makes, so be careful.

I wrote this in part just to feel better, and it’s at least calmed me. Thanks for everything you guys do.

When I followed up with Reed to ask if we could share his story, he said he won’t let this incident stop him from using his bike. “I’m riding to work tonight,” he wrote, “I’m not letting the bastards stop me.”

The post Man says he was doored intentionally on NE Tillamook this morning appeared first on BikePortland.org.