The Tophill Trestle above Highway 47 south of Vernonia.
(Image: State of Oregon)

The 21-mile Banks-Vernonia State Trail is a gem. This former railway route makes a vital connection in our regional bikeway network and the path has become a huge success, drawing thousands of adventure seekers and weekend warriors on sunny weekends. But if there’s one thing about it that could be improved, it’s the crossings — especially where it crosses Highway 47.

Now Oregon State Parks is embarking on a project that could make one key crossing better — and possibly lay the groundwork for a new biking/walking bridge over the highway.

The old Tophill Trestle sits just east of where the B-V Trail crosses Highway 47 about nine miles south of Vernonia at the Tophill parking lot and trailhead. It’s at mile 12 or about the half-way point of the path. On either side of the highway crossing the path descends and then climbs very steeply through a series of switchbacks. It’s so steep and windy that the state has signs encouraging people to walk their bikes. (Confession: On one foggy wintry morning a few years ago I crashed going down the south side!)

It’s easy to see why the railroad’s original route avoided this canyon by making a gradual and level turn high above where the highway runs today. The graphic below shows the two routes. The railway trestle is in yellow and the B-V Trail is blue. The existing path is blue, the old railroad route is in yellow.
(Graphic: Google Maps/BikePortland)

The reason State Parks detours away from the old railroad route at this spot is because the trestle has been irreparably damaged by fire and old age. The pilings and supports are so rotten that the state says it must be demolished and removed in the next 1-2 years.


Chris Havel, associate director of the Oregon Parks and Recreation Department, contacted us last week to share a new online survey about what they should do at this crossing. In the short-term, Havel said they will focus efforts on making the highway crossing safer; but in the long-term they just might consider going back to the old route. There are no solid plans to build a new bridge, but Havel says, “If people really want a bike/ped bridge over the highway, we could do some design work as part of the project to demolish the old one.”

Once the old bridge is removed, Oregon Parks, the City of Vernonia, Columbia and Washington counties, and the Oregon Department of Transportation will come up with a set of proposals for how to improve the crossing. The online survey will be the first step in developing those proposals.

If you bike on the Banks-Vernonia Trail, make sure to fill out the short survey and let the State of Oregon know what you think. Who knows, if enough people speak up in support of a new bridge we could end up with another one of these wonderful wooden bridges, like the Buxton Trestle over Mendenhall Creek: 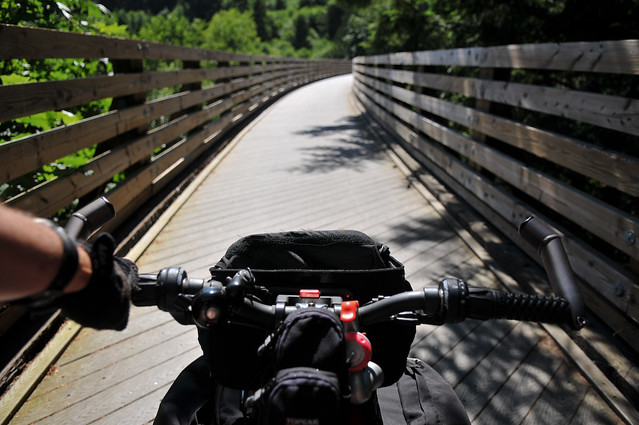 The post State Parks: Do you want a new bike/walk only bridge on the Banks-Vernonia State Trail? appeared first on BikePortland.org.