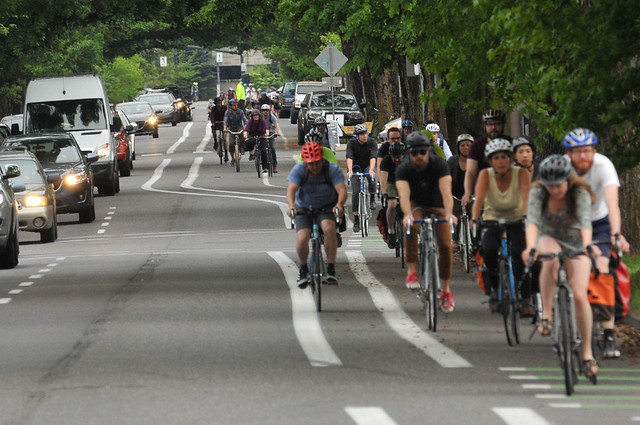 It’s been a few years since the last time we shared a look at Portland bike traffic. With the sunny weather we’ve been having and the first year of the Bike More Challenge in May instead of September, I figured it was time to take another look.

I think we can learn by looking at bike traffic. We can see how people use the street and get a wider context for our design discussions. I often find the people themselves most interesting. Do riders prefer backpacks or racks? How many people ride drop-bar road bikes versus upright bikes? Do their faces look stressed out and angry or calm and serene?

I started out near the Hawthorne Bridge but wasn’t all that impressed with the volume of bikes so I rolled north to Williams Avenue.

I’ve said for years that Williams is the best bike street in Portland and after seeing it yesterday I’m glad to know that remains true. Glad not just because it leads to my neighborhood and I ride it a few times a week (I usually opt for the Mississippi/Albina hill via Interstate), but also because it’s the only dense commercial and residential street that has quality cycling access. Our other popular, dense, and destination-rich commercial streets like Hawthorne, Mississippi, Belmont, 28th have no dedicated bicycle access and East Burnside only has a standard (and uncomfortable in my opinion) bike lane.

For the uninitiated, Williams is also perhaps the most hotly debated bikeway in the city. When I last photographed bike traffic there in 2011 it was already the busiest bike street in Portland but it still had nothing more than a loathsome bike lane. It was bursting at the seams with traffic and it was frequently driven over by bus operators picking up passengers. This bus/bike “leapfrog” action was a major reason the Bureau of Transportation decided to redesign the street in January 2011. Then the project sparked a debate when members of the advisory committee said perspectives of longtime black residents were not being respected. The conversation turned from engineering to an important dialogue about the intersections of systemic racism, urban planning and gentrification in a neighborhood that was once an epicenter of black culture.

After a 17-month public process, the new plans for Williams Avenue shifted the bike lane to the left side (to avoid bus conflicts) and dramatically reconfigured road space to devote much more room to cycling.

The new design has its detractors and it’s far from perfect; but overall it’s vastly improved over what we had before. And after watching peak-hour traffic yesterday it seems to be doing its job of facilitating a high volume of bicycle riders.

But before we get to Williams, here are a few others shots and thoughts from my observations yesterday.

I’ll return to Hawthorne to photograph bike traffic some other time, but this one image from yesterday really stood out. The bridge path is very crowded during peak hours. Look at the expression on the face of the man behind the person with the yellow jacket. He’s worried that if those people walking and running swerve at all there could be a bad crash. (Hint: If you are in this situation, don’t stress! Just sit up and slow down.) 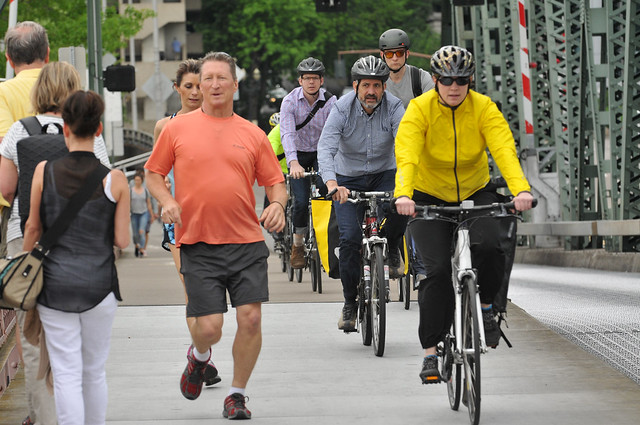 Another busy spot is the Esplanade near the Steel Bridge, especially the ramps leading up to Peace Park and the Rose Quarter area… 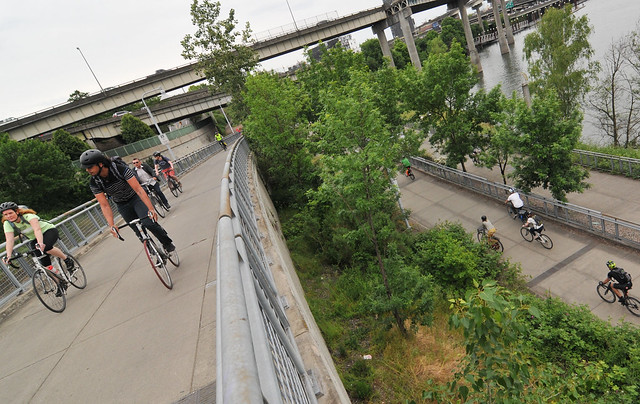 At the top of the Esplanade path where it re-joins the street (NE Lloyd and Oregon) there’s a bike signal that always has a large queue. Yesterday it was even more hectic due to a BTA Commuter Station set up near the top (and the free coffee and snacks were totally worth it!)… 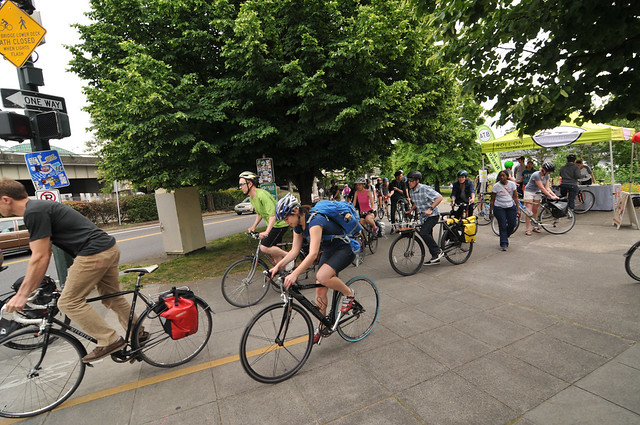 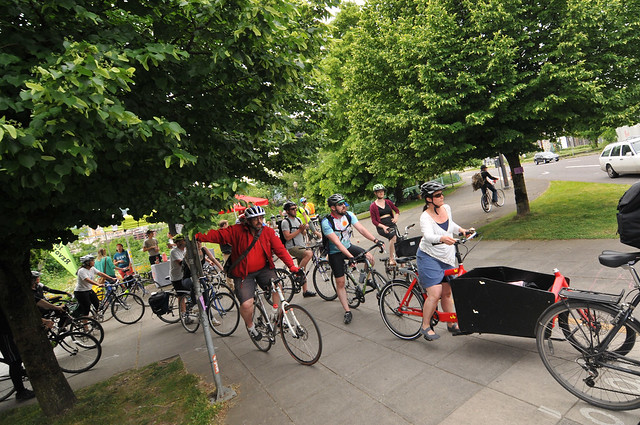 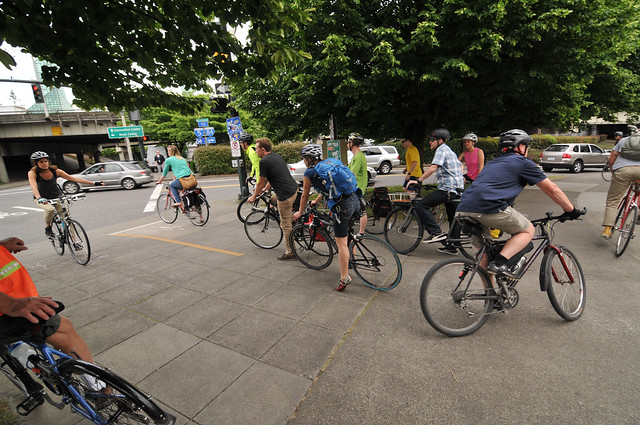 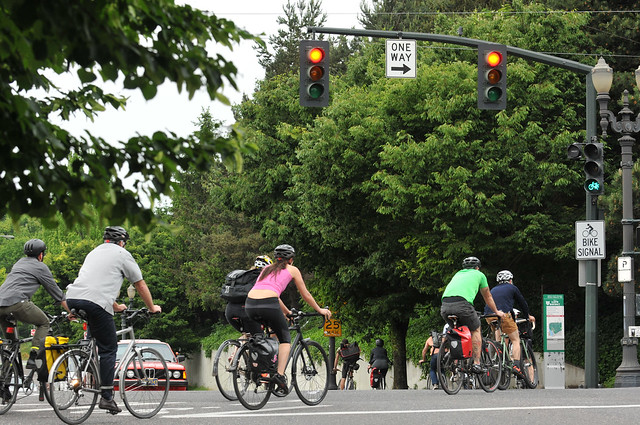 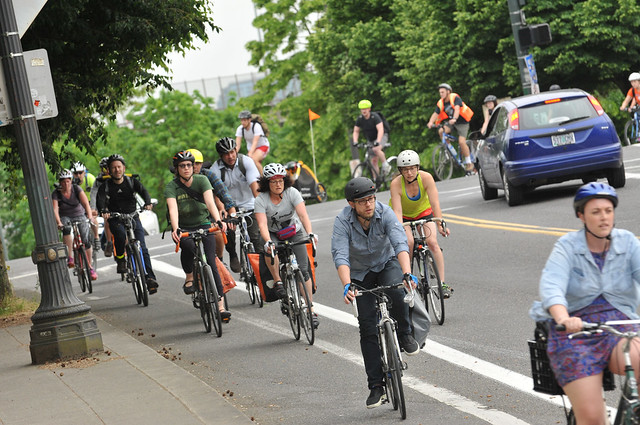 Then I observed the Rose Quarter Transit Center. Remember when riding through here was illegal? Thanks to the BTA and TriMet these bike lanes through the transit center have been serving thousands of bike riders every day since 2008. Here’s how it looked yesterday… 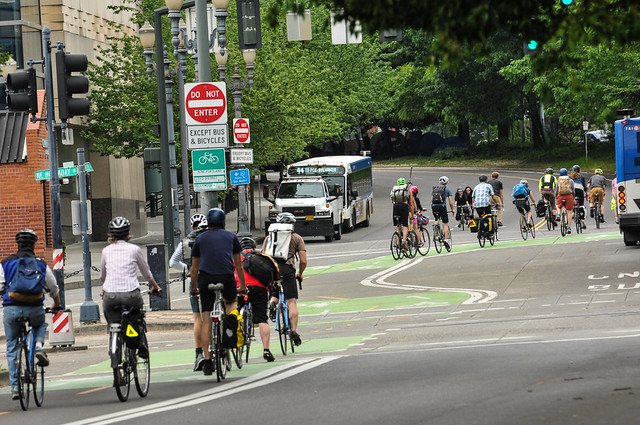 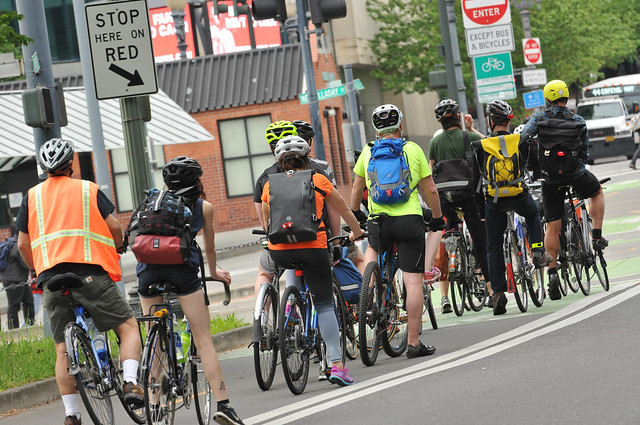 Now let’s talk about Williams. It was actually hard for me to contain my excitement a few times when I stood aside the huge platoons of bike riders that went by. There were some groups that were 30-40 riders strong and at times you could see 2-3 separate groups all the way up the road. I’d love to know how current bike traffic volumes compare to auto volumes.

One reason Williams gets so much bike traffic is the feeder routes are strong. Most of that traffic from the Esplanade and the Rose Quarter heads right for it. So too does a ton of bike traffic from Weidler off the Broadway Bridge.

This is Weidler looking west from Williams… 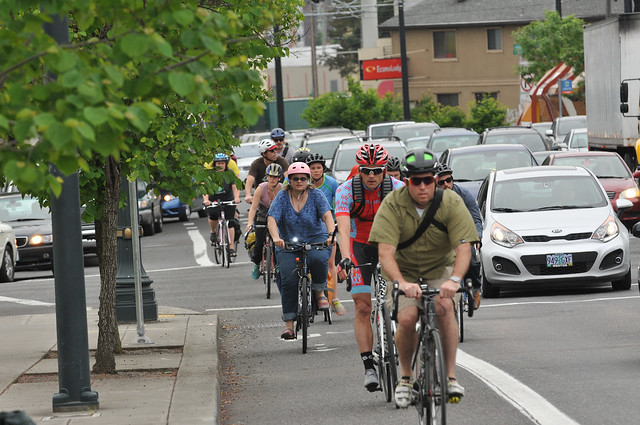 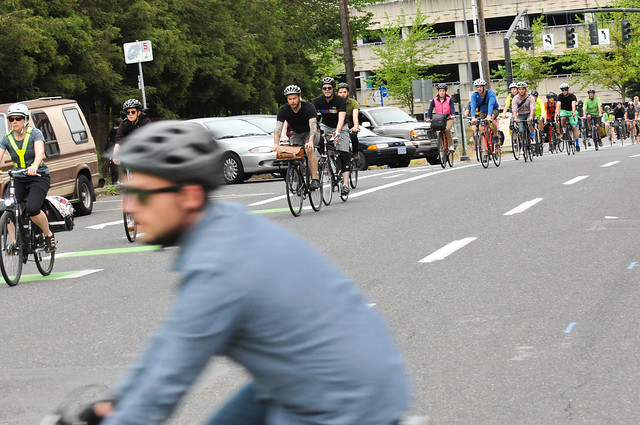 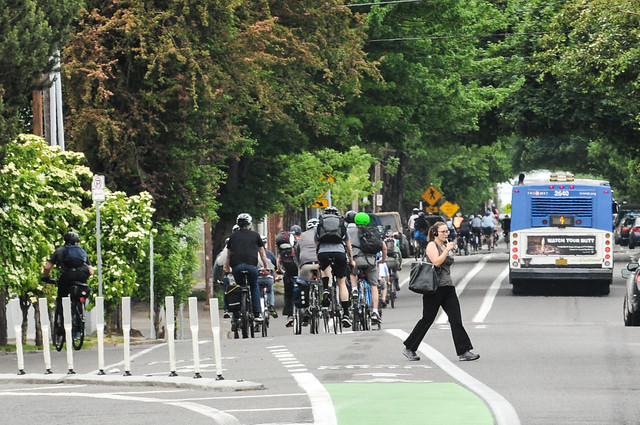 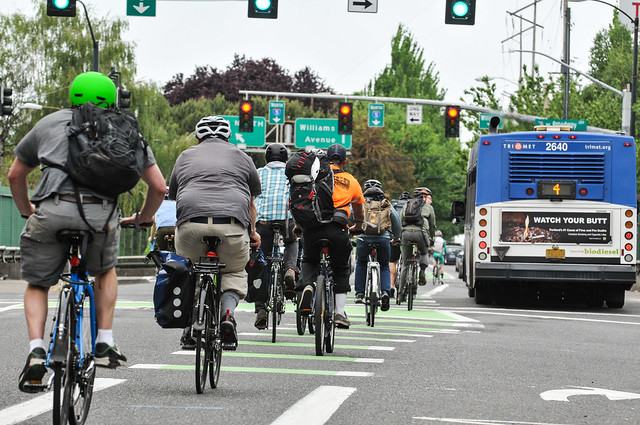 One thing I noticed is that about half the bike traffic on Williams are people who I assume are women present as women: 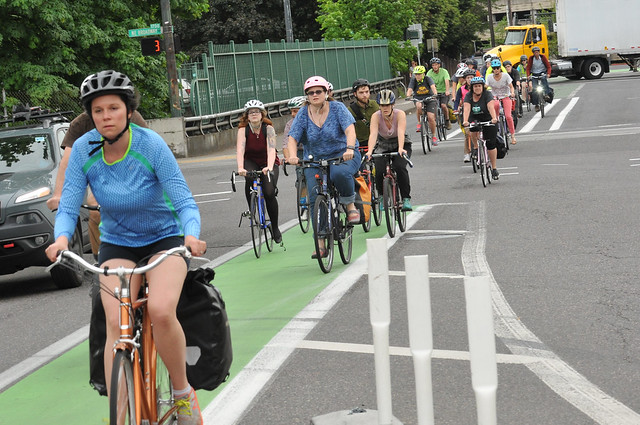 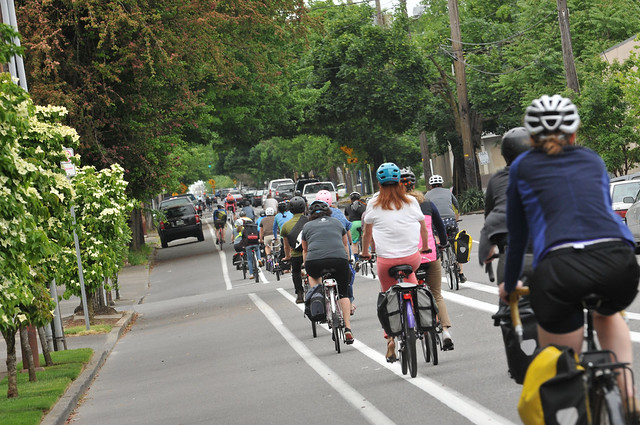 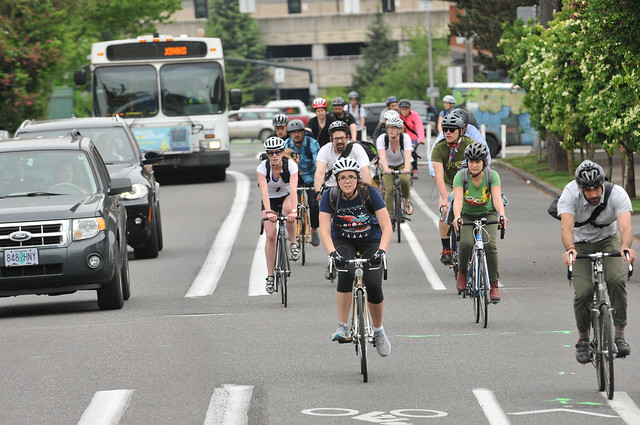 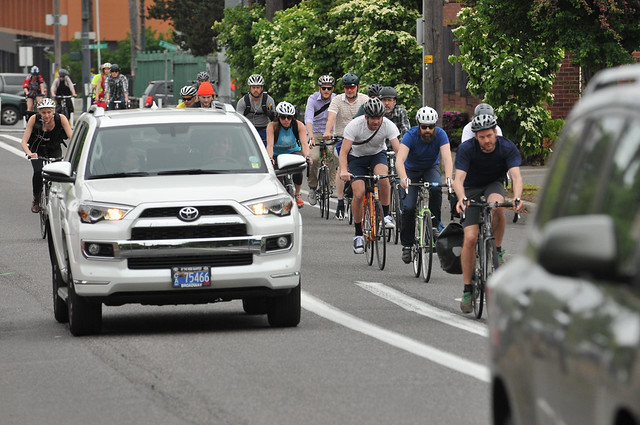 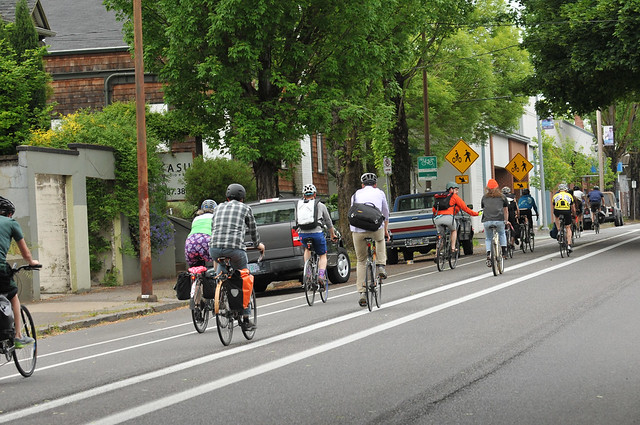 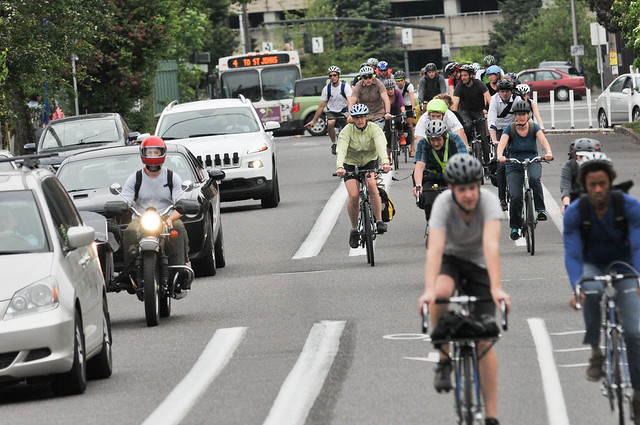 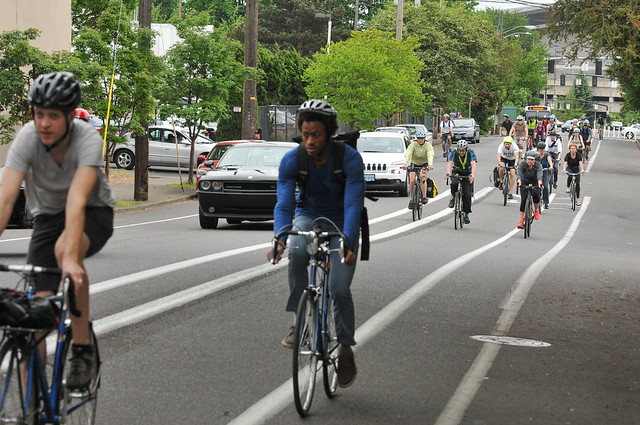 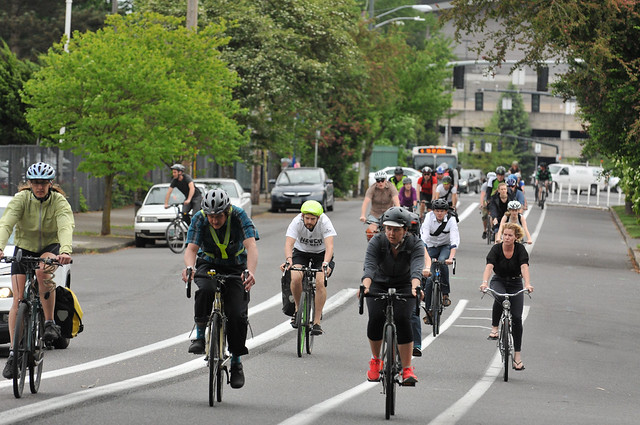 In the photo below, notice how far people ride to the left. This tells you how important physical separation is — and how little people trust other road users to not suddenly swerve into the bike lane… 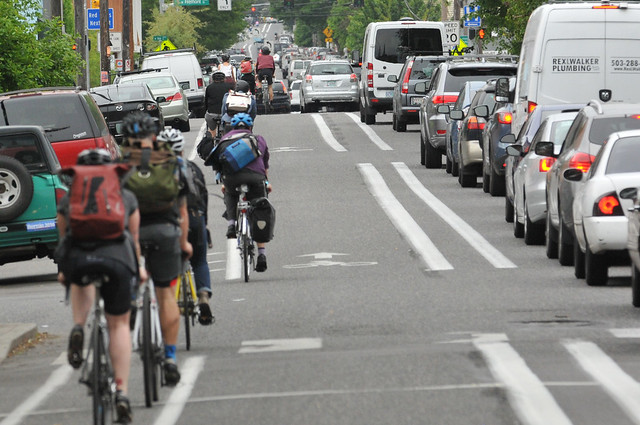 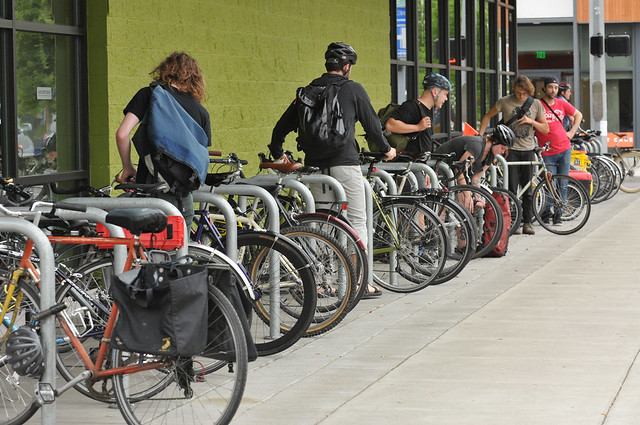 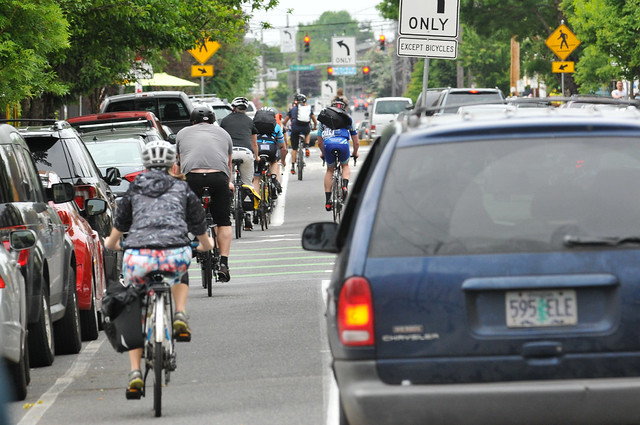 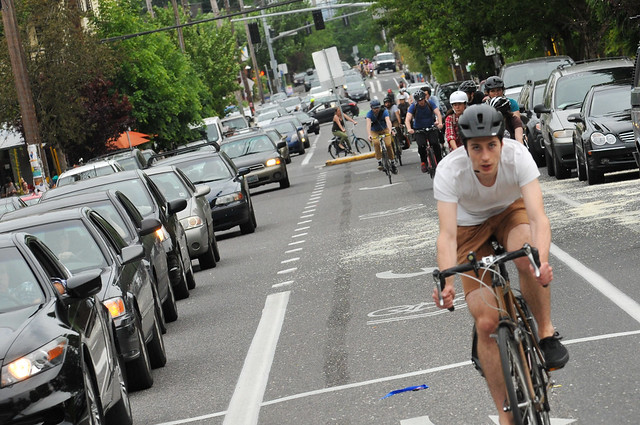 Photographing people on bikes is sort of an obsession of mine. I hope you find these images interesting and useful so I can justify continuing to do it. Is there anything in these images that stands out to you?