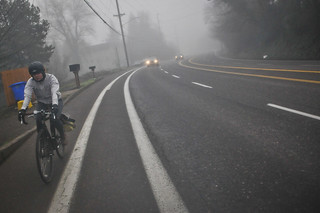 This section of Beaverton-Hillsdale Highway is one of four locations that will be monitored by fixed photo radar cameras beginning this summer.
(Photo: J. Maus/BikePortland)

Portland’s fight against the epidemic of speeding on our streets is about to get real. Beginning August 1st of this year the city’s first unmanned fixed photo radar cameras will go into operation.

The new cameras will be installed by Xerox Corporation at four locations as per an ordinance adopted by Portland City Council yesterday (PDF). The ordinance calls for two cameras (facing each direction) that will be in operation 24 hours a day seven days a week at each location: Beaverton-Hillsdale Highway between 30th and 39th, SE 122nd between Foster and Powell, Marine Drive, and outer SE Division. The Portland Bureau of Transportation (PBOT) is focused on these locations because they are all on a list of “high crash corridors” that have a history of fatal crashes that’s at least 25 percent higher than normal. From the city ordinance that passed yesterday. Note that people who speed through each of the camera locations will have one month of warnings before real citations go into effect.

This push for fixed photo radar cameras (which the City has smartly begun referring to as “safety cameras”) began well over three years ago when the Bicycle Transportation Alliance and other advocates started talking to state legislators about the idea. State law needed to be changed because the old law allowed cameras to be used only if a police officer was present and only if it moved around every few hours.

By 2015 the City of Portland made the speed camera issue a top legislative priority and the Oregon Legislature ultimately passed House Bill 2621 and Oregon Governor Kate Brown signed it into law in July.

The push for these cameras fits perfectly into the City of Portland’s committment to Vision Zero, an initiative PBOT Director Leah Treat has adopted as her top priority. PBOT data shows that 32 percent of all fatal crashes in Portland involve speeding. In an interview with KGW News yesterday Treat said, “We are going to be targeting aggressive drivers who are speeding… These are the corridors that pedestrians are dying, cyclists are dying and cars are in crashes.”

“Speeding and aggressive driving are top contributing factors to serious and fatal crashes… The program is a cornerstone of the City’s efforts to reduce speeding.”
— excerpt from ordinance that passed yesterday

The City of Portland currently manages 11 red light cameras. A report by the City Auditor last summer showed that those cameras are doing their job; but there are some key issues worth noting as we enter this new era of photo-enabled enforcement. One thing to watch is how this new program will be administered. For camera operations and citations to go smoothly, PBOT, the Portland Police Bureau, Multnomah County (traffic court), and Xerox (who will remain as owner of the cameras according to the memorandum of understanding) will all have to coordinate their systems and efforts. If there are weak links in the chain of processing citations, some of the tickets could be dismissed. In the City of Denver a report found that as many as one in three citations don’t hold up in court for a variety of reasons.

“This ambitious plan will require a level of coordination between Police and Transportation,” the City Auditor proclaimed in their analysis of the red light camera program, “that we did not find evidence of while conducting this audit.”

But let’s take a step back: This is great news! PBOT, Transportation Commissioner Steve Novick, the BTA, Oregon Walks (whose leader Noel Mickelberry testified at City Council yesterday), and all the other groups and individuals who changed the law and pushed for this program deserve a big high-five. The speeding epidemic won’t end overnight, but these cameras are a very big step forward in changing cultural norms around driving. And like we reported back in March, they just might allow us to finally flip the script on the scofflaw narrative.