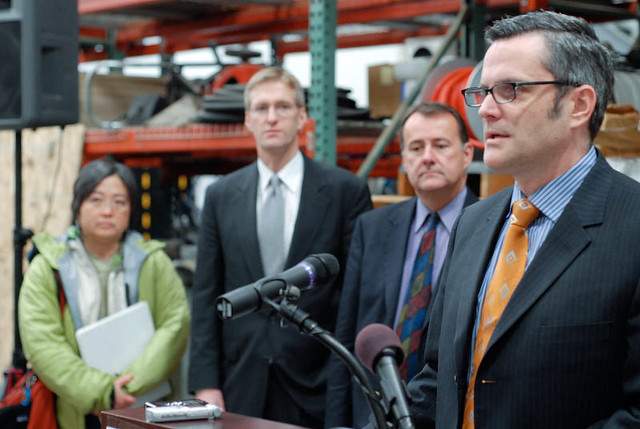 Transportation Commissioner Sam Adams makes the case for local transportation funding in 2008. Ted Wheeler, then the Multnomah County chairman, is in the background.
(Photos: J.Maus/BikePortland)

Tuesday’s vote to create a local gas tax, coupled with the previous week’s new fee on large trucks, marks a milestone for the City of Portland.

Though it’s only a small share of what it’ll take to achieve the city’s goal of making car ownership fully optional by vastly improving its walking, biking and transit systems, revenue from the gas tax will triple the city’s standing budget for new walking and biking infrastructure, from $3.5 million to $10.5 million per year. Those investments will demonstrate that this stuff works — and, as we argued last week, they’ll help deliver further economic growth that Portland will be able to reinvest in itself.

It’s enough to make you wonder what might have happened if the city had gotten this burst of new investment the last time it tried to: in 2008.

That wasn’t the first time the city has tried to raise significant new money to preserve and improve its streets. But it was the first one BikePortland covered in detail, so we’ll start our recap there. Adams speaking with reporters
in 2008.

October 15, 2007: Then-Transportation Commissioner Sam Adams unveils a new revenue plan called “Safe, Sound and Green.” “The Portland component will consist of two revenue sources: a new 3 cent City gas tax and a SMF (pronounced smiff, Street Maintenance Fee),” Chris Smith explained on Portland Transport. “The SMF will average $4.50 per month for residents and run from a $10 or $20 for small businesses to $1,000+ for large retail sites. The SMF will be collected on water bills and both residents and businesses will be able to earn discounts by voluntarily undertaking certain ‘green’ activities.”

December 2007: A city flier makes the case for the program. “The last gas tax increase was in 1993. This means that funding for transportation safety and maintenance has not kept pace with the increasing demand or inflation and as a result, the City of Portland faces a $422 million maintenance unmet need. Multnomah County faces a $485 million shortfall for their bridges. In addition, our community faces an estimated annual economic impact of $412 million associated with needless deaths and injuries on Portland’s streets.” January 9, 2008: Adams brings the proposal to city council. “Many neighborhood, business, and transportation activists are here to testify on the proposal,” BikePortland reports from City Hall. “Most will lend their full support but there are others in the room who plan to testify against the proposal. Among them will be noted alcohol and petroleum industry lobbyist Paul Romain.” Romain threatens to gather signatures take the issue to the ballot in 2008 alongside Adams’ anticipated run for mayor.

January 14: Adams tactically breaks the proposal into three separate actions, an attempt to triple the cost the gas industry would face for gathering signatures against it.

January 23: Romain backs down, agreeing not to put the fee on the ballot in exchange for some rate cuts from Adams.

January 30: The city council votes to pass Adams’ plan. “The plan would be a huge boon to bicycling in Portland, with nearly $30 million (out of $400 million total) going toward bike safety improvements,” BikePortland reports. But that same day, Romain and the Oregon Petroleum Association change course and say they will take it to the ballot after all.

Feb. 5: Mayor Tom Potter says the council should put the issue on the ballot.

Feb. 6: Adams agrees to do so, promising a high-profile fight to November.

July 24: After a city poll shows only 55 percent support for the street fee measure, Adams (by this point the mayor-elect) kills the proposal. “We will wait for the economy to get better,” Adams tells the Mercury. “In the meantime hopefully we will get some help from the state.” More twists and turns followed, including a 6-cent statewide gas tax hike in 2011 that ended up delivering less money than expected because driving declined so quickly during the recession. The city of Portland found new revenue in parking meters and a leaf collection fee; it also found new expenses when Adams committed millions to Tilikum Crossing and a new Sellwood Bridge.

All of this set up the bewildering saga of 2014, which essentially resurrected the Safe, Sound and Green concept, then retooled it as a progressive income tax, then scrapped the income tax in hopes of another statewide gas tax hike, which fell through, which led finally to Novick’s decision to return to probably the simplest possible proposal: A voter-approved gas tax.

Then, this week, after 10 years of internal and external rhetoric and countless news articles on the subject, voters got to vote.

Then, this week, after 10 years of internal and external rhetoric and countless news articles on the subject, voters got to vote.

And they voted for it.

And unlike Adams’s proposal, every cent will come from a new tax on an activity that it is the city’s official policy to discourage: driving a car.

It’d be easy to see this saga as a pointless circus, and it’s certainly resembled one sometimes. But here’s something else to remember: 10 years is a long time in the life of a city like Portland.

This is a city where low-car households (more adults than autos) have been accounting for 50 to 60 percent of population growth for years. It’s a city that added 5,000 new apartments in 2012 and 2013 — and reported an estimated 5,000 additional daily bike commuters in 2014. It’s a city where auto registrations per resident are down 8 percent since 2007.

We are the Portlanders we’ve been waiting for. This week, we proved it.