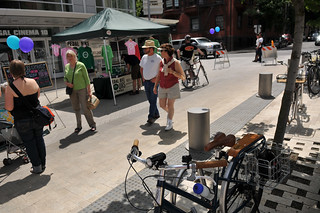 Our streets could thrive if we let them.
(Photos © J. Maus/BikePortland)

Something big is happening in Portland: We’re entering an era where streets are seen as places for much more than private vehicle travel and storage. An era where the public right-of-way can reach its potential as a thriving place that adds to the vitality and energy of our city.

Livable streets are in Portland’s DNA, but a combination of factors have recently come together to energize and formalize the movement and soon it could be enshrined in official city policy.

The City of Portland Bureau of Transportation is in the process of selecting a private firm to develop a “Livable Streets Strategy.” According to the request for proposals (PDF), the city is, “looking at innovative ways to open Portland’s streets, parking spaces, plazas, and alleys to a range of events, programming, and physical infrastructure that reinforce the idea that public streets are public places to be enjoyed by all ages and abilities.”

We knew something special was afoot ever since Transportation Commissioner began literally jumping up-and-down and chanting “Bet-ter Block! Bet-ter Block!” at the opening of the Better Naito project in 2015. The three-way romance between City Hall, the Bureau of Transportation and Better Block PDX has helped create the political and public momentum neede to re-think how we use our streets. But it didn’t start there. 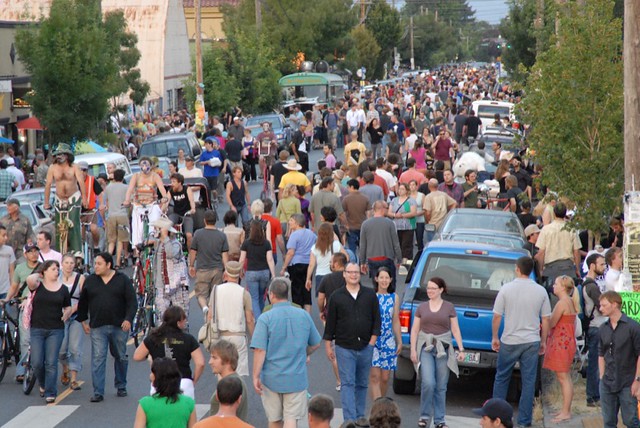 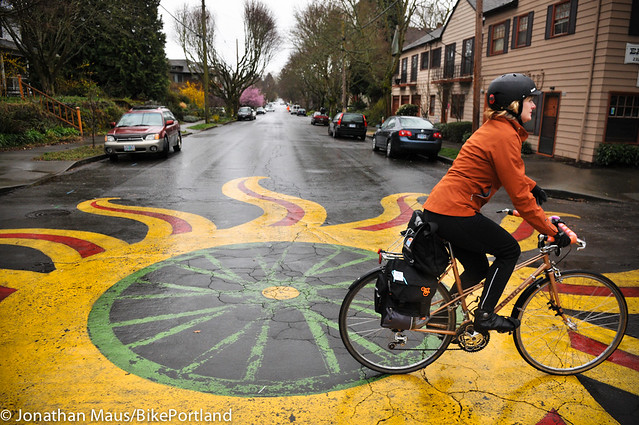 For many years PBOT has been a willing supporter and national pioneer of livable streets-related projects and programs. Have you ever attended or organized a block party on a local street? Or sat in a “street seat” outside your favorite cafe? I know many of you have parked in an on-street bike corral. Or how about those huge colorful paintings that adorn intersections throughout the city? Ever seen one of those? All of those things are officially sanctioned by our city government.

“PBOT wants to create unique and exciting opportunities for the public to take advantage of Portland’s right of ways.”
— From the city’s RFP

Programs that allow citizens to change how streets are used are so popular that the city has trouble keeping up with demand. As we reported yesterday, even though the bike corral program is well-established there’s still a waiting list for businesses that want in on it. And as we’ve seen with upstart activist groups like the anonymous Portland Transformation, some people aren’t willing to wait.

Instead of staying locked up in their cubicles and trying to hold back the dam, PBOT is riding this wave of citizen-initiated demonstration projects. In an era of limited budgets and staff capacity it makes complete sense. Their unprecedented partnership with Better Block PDX — a group that has recently transformed Naito Parkway and Northeast Broadway — has cemented PBOT’s role as more of a facilitator and not just an initiator.

When nonprofit Oregon Walks came to PBOT with the idea of a walking event styled after Sunday Parkways, the outcome was Oregon Walkways. PBOT (and several other organizations) are key partners, but Oregon Walks is the main organizer and host.

With their Livable Streets Strategy, PBOT wants to create an umbrella for all existing and new placemaking programs and projects. Currently the programs are scattered throughout the bureau — each one with a different staff person as the citizen liaison. This is not only cumbersome from management standpoint, but it also leads to a lack of unified branding and consistent public messaging. “PBOT wants to create unique and exciting opportunities for the public to take advantage of Portland’s right of ways,” PBOT writes in their RFP. “The final Strategy is to provide a programmatic and regulatory framework that will inform the planning, permitting, and management of community use projects in the right-of-way.”

PBOT will still handle livable streets programs, but they want the community to take a larger role. The firm that wins the project (estimated to have a budget of $100,000 to $130,000) will help the city identify opportunities to make that happen.

Join us for discussion, drinks, and snacks.

Say for instance a local business district wants to repurpose an unused portion of road and create a public plaza with tables, chairs, and walkways (an actual example in the RFP); the consultant firm would would devise a process to make that possible.

Also in the RFP is a call for the selected firm to identify six pilot projects for “immediate implementation.” Details are scant so far but the RFP says all deliverables are due by September 30th of this year.

Why is this happening now? It’s a combination of things. Paramount among them is that PBOT has undergone a quiet transformation in the past two years or so. For the first time in at least the past decade (the time I’ve been watching), nearly every major manager at PBOT (at least all the ones that matter) — all the way up to and including Director Leah Treat and Transportation Commissioner Steve Novick — support livable streets. Having people at key positions who say “yes” to new things is a big deal. In the past there was always at least one stick-in-the-mud who would ruin the party.

Speaking of sticks-in-the-mud, roadways are often a battleground of competing uses and debates about how to use them are fodder for controversy. Empowering citizens and businesses to initiate projects themselves is a smart way for PBOT to avoid some of the heat.

It’s also likely that the City of Portland is tired of hearing about how they’re falling behind other cool cities when it comes to innovative livable streets projects. With the aforementioned staff now in place, and a new — much more progressive — mayoral administration on the horizon — they might feel like it’s go time.

Another factor? This August Portland will host the International Open Streets Summit and the City probably wants to make sure they have some exciting news to share.

We can’t wait to see what this summer brings. We’re so excited in fact that we’ve made open streets the theme of our next Wonk Night. Please join us next Wednesday June 1st at Lancaster Engineering/Street Labs where we’ll talk with the people leading this new charge and you’ll learn all the latest insights.